You Won’t Find Most Entrepreneurs Napping On the Job 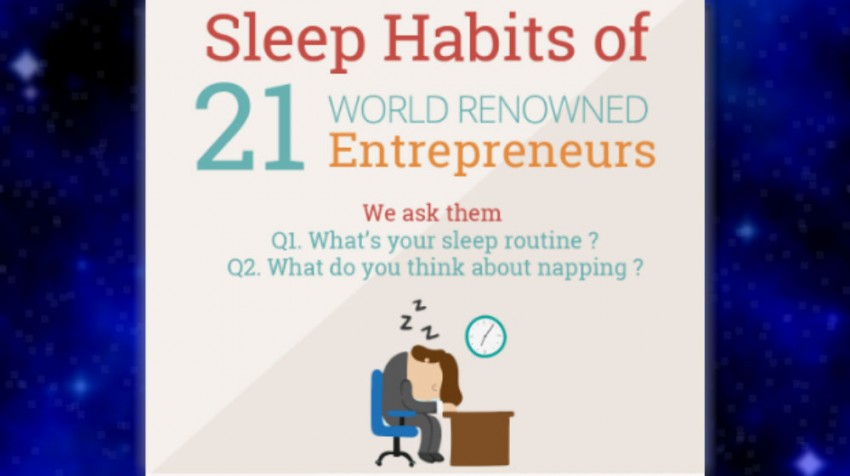 Getting enough sleep is essential to a productive work day. But busy entrepreneurs don’t always have time to get as much sleep as they’d like.

A new infographic from furniture company Home Arena examines some of the sleeping habits of successful entrepreneurs, including Small Business Trends CEO Anita Campbell. And though many of their sleep schedules vary, there is one thing that most of them have in common.

The majority of entrepreneurs included in the infographic said they never nap. And many who do prefer to save those types of breaks for the weekends or evenings when they are done with work anyway. As Eric Ward of EricWard.com pointed out, just one half-hour long nap in a week means 200 hours a year that could have been spent building a business.

Other entrepreneurs, such as Jimmy Daly, of JimmyDaly.com, and Sujan Patel, of SujanPatel.com,  say that they prefer spending that time getting some light exercise. Daly likes to walk his dog or read during his breaks throughout the day and Patel just walks outside for some fresh air.

There were a few entrepreneurs, however, who say that naps can help them feel refreshed and better prepared to take on the day. For example, Sue Anne Dunlevie of Successful Blogging said that regular afternoon naps, sometimes during the week and always on the weekend, help to keep her refreshed. And Ana Hoffman of Traffic Generation Café said:

“When I can’t think straight, taking a nap makes a lot more sense.”

Of course, getting a full night of sleep helps curb that desire to nap in the middle of the day. Getting eight hours of sleep a night is a popular goal. Some don’t always actually accomplish that, but those who do tend to have a set sleep schedule that they stick to each night. You can view the infographic in its entirety below.

So what do you think? Is napping a benefit to your business or just a waste of time?