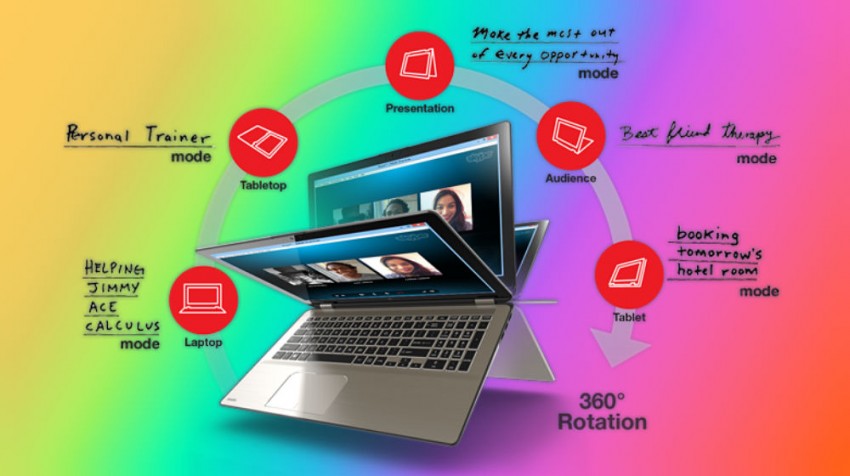 Details for the Satellite Radius 12 have been a little thin so far.

What is known is the convertible will come in two display options. Users can choose a Full HD 1920 x 1080 pixel display, or go for broke with the beefed up 4K 3840 x 2160 pixel option. And really, the promise of 4K packed into a display measuring less than 13-inches could be hard to turn down.

Instead of a detachable keyboard to convert from laptop to tablet, the Satellite Radius 12 features a hinged keyboard offering 360-degree movement. This is not a new design, as other companies have featured a hinged keyboard on their devices.

Users will be able to fold the keyboard into a number of different positions depending on their needs. Fold it all the way around to be a tablet, in half to be a tent, and so on.

Under the hood, Toshiba claims the Satellite Radius 12 will offer up to a Core i7 CPU. This is part of Intel’s sixth-gen Core i processors, perhaps more recognizable by the name of Skylake. Reports also claim the 2-in-1 device will deliver up to 8GB of RAM.

The Satellite Radius 12 is set to provide support for Windows Hello, a part of the Windows 10 operating system. Microsoft claims Windows Hello eliminates the need for passwords to unlock your device by instead using facial recognition, an iris scan, or a fingerprint scan.

This information is stored only on your device to offer more security. Though with reports of such biometric security measures being easily hacked on other systems and devices, some may feel more comfortable forgoing this feature.

Keep your eyes open for the Toshiba Satellite Radius 12 to hit the U.S. market sometime in the fourth quarter of 2015. Though no specific details were given as to release dates or pricing.