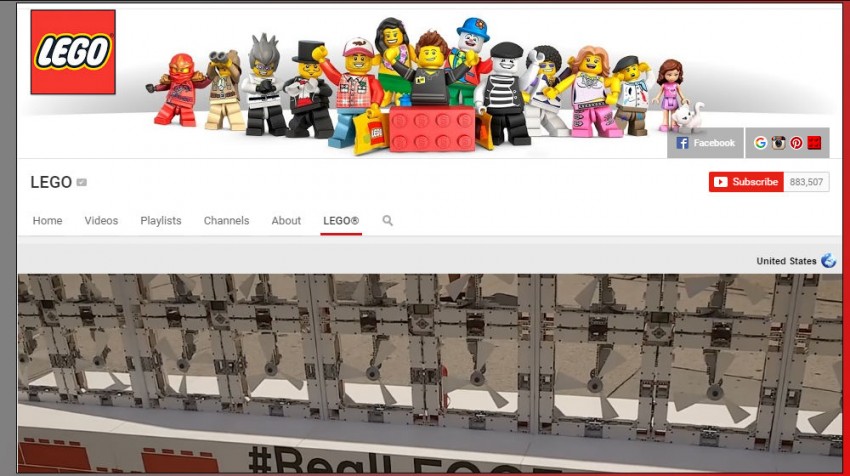 In today’s world of Google searches and viral Internet videos, it is no wonder that YouTube has had a profound effect on brand engagement. Companies are utilizing the site to spread brand awareness across the globe, and it appears to be working.

LEGO was the most highly engaged brand in Q2, with over 189 million engagements, most of them on YouTube, according to the ListenFirst Digital Engagement Ratings.

The ListenFirst DER analyzes “owned, earned, or organic consumer behavior” for companies in the Redbook 500, which includes brands based on their advertising spend, revenue and social media engagement. ListenFirst looked at these companies’ engagement across multiple social media channels including Facebook, Google+ and more.

“This quarter, LEGO’s social channels were very content-heavy, with Lego sharing more than 700 new pieces of content, with a special focus on YouTube content. The content that accumulated the most views and engagements on Lego’s official YouTube channel were a series of promotional videos for ‘Jurassic World’ with the video ‘A Day in the Life at Jurassic World’ standing as the top post across all channels for the quarter when it accumulated over 3.2 million interactions.”

See the complete video below:

LEGO was followed by MTV, Hasbro, NFL and Coca-Cola for the five most engaged brands in the second quarter. Top brands overall included companies from the toy, gaming, food and beverage, retail, health and beauty, fashion  apparel and tech industries.

On YouTube, the highest performing single post of all was one for Gillette’s body razor, though this was not enough to push the company into the top 20 DER brands.

Payless ShoeSource saw the greatest growth in engagement with an increase of 10,000 percent since Q1. Payless saw most of its engagement on YouTube.  The company is focusing on boosting sales and promotions over the previous quater. A video posted in June for their sandal sale has had over 4.5 million engagements.

Your business may not be the size of most of these companies. But the study does reveal the importance placed on social engagement by some of the leading brands. And it may hint at which channels may be most effective in gaining engagement for your small business too.

Ashley Davis is a Staff Writer for Small Business Trends, covering a variety of topics. She is a freelance writer for various news sites and writes about many subjects, including politics, business, real estate, entertainment, beauty and lifestyle.
2 Reactions
Subscribe
Follow @smallbiztrends
RSS LinkedIn Pinterest iTunes