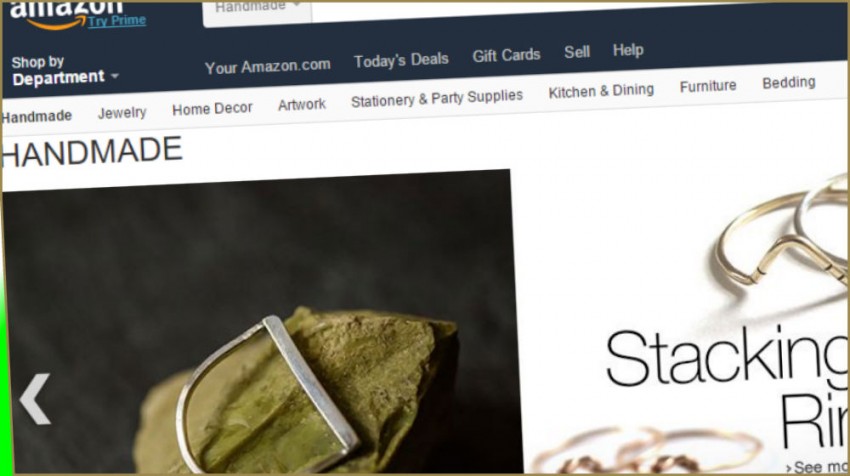 Etsy has long been known as the biggest name in the market for handmade goods. But it’s now facing some huge competition thanks to a new handmade marketplace from eCommerce giant Amazon. And that’s not the only way that Amazon broke into the news this week.

Read on for a full list of small business related headlines in this week’s Small Business Trends News and Information Roundup.

Watch out Etsy, Amazon is issuing a challenge for the handmade market space with a new store featuring only artisan made products. Named Handmade at Amazon, the new store is tailored for factory-free handmade items. Amazon says it already features more than 80,000 handcrafted products from artisans in more than 60 countries.

44 Percent of Shoppers Go to Amazon First – Are You There?

Here’s one reason why your small business should consider selling products at Amazon.com. According to a new study from BloomReach, 44 percent of American consumers go directly to Amazon before using search engines like Google (34 percent) or a retailer’s site (21 percent) to search for products.

At Dell World 2015, the annual Dell customer convention this week in Austin, the big buzz was about Dell’s acquisition of cloud computing provider EMC, and the announcement of the Dell Hybrid Cloud System for Microsoft. Both are primarily of interest to larger enterprises.

About six months ago, Dropbox quietly announced Notes — a collaborative note-taking tool — launching it as an invite-only beta version for a few select people to play with. Back then, Dropbox said Notes was “a new way for teams to write together.” However, now Dropbox has officially rebranded Notes to Dropbox Paper and its beta-testing phase is expanding significantly.

Former search heavyweight Yahoo has entered into an agreement with current champion Google. Yahoo will gain access to Google’s Web and Image search results services along with search advertisements under the deal. The Google Yahoo deal is not a bad setup for either party.

Wix has relaunched and added additional components to its Wix Music platform, which debuted in March. It was mainly positioned as a platform allowing musicians to upload their recorded music directly to their new Wix site and sell it immediately. Initially, Wix also offered specialty site themes.

NASA Says It Will Start Licensing Technology to Startups

Could NASA be looking for funding to gear up for a trip to Mars? Public interest in manned missions to Mars has been a fantasy for decades and is slowly becoming a reality. Riding the wave of enthusiasm, NASA has tentative plans for missions to Mars and the asteroid belt.

Amazon is announcing a service called Space Needle to help clients of its Amazon Web Services leverage the amount of data now available from their customers. The quantity of data now available to businesses large and small especially gathered from online traffic and customer behavior is vast.

Andy Rhodes of Dell: View IoT as an Opportunity, Before it Becomes a Threat

At this week’s Dell World event, as the case at last month’s Dreamforce event, some of the main focus was around the Internet of Things (IoT).

Square Inc. CEO Jack Dorsey has lured a top Yahoo executive away from CEO Marissa Mayer. Jacqueline Reses had been Yahoo’s chief development officer and her move to Square is viewed as a blow to Yahoo, sources told BloombergBusiness. Yahoo has lost a handful of top executives recently.

If you’re in the mood for holiday cheer and a little inspiration for your PPC and online marketing plans, look no further than our holiday planning guide for digital marketers.

Online reviews have the potential to make or break your company’s reputation. But even companies with great products and services can see sales suffer due to just a few negative comments. That’s where Future Solutions Media comes in.

Twitter has unveiled Twitter Polls, a new feature that allows for the collection of feedback in a more straightforward way than previously possible on the service.

Social Media Usage Nearly 10 Times Higher Than a Decade Ago

With the Internet increasingly available to the public, reaching out to the rural areas, social media usage has been on the rise. This has created a forum that enables small businesses to reach target customers more easily. The Pew Research Center has released a study that looks for social media usage trending by different groups. The study suggests U.S.

Did You Know 45 Percent of Pinterest Users are Outside the U.S.?

Nearly half of Pinterest users are from abroad. The revelation may come as a surprise to small business owners and other marketers that have been under the impression that they were targeting a primarily domestic audience. The report comes from Marketing Land. Pinterest recently crossed the big boys line — 100 million monthly active users.

HelloGiggles by Zooey Deschanel Acquired by Time Inc. for $20 Million

Time Inc. has acquired HelloGiggles, an online platform dedicated to upbeat coverage of young women’s topics and issues. The small site — founded in 2011 by actress, musician and TV personality Zooey Deschanel, Molly McAleer and Sophia Rossi — was nabbed for a purchase price of around $20 million, the Wall Street Journal reports.

Apple could face a stiff penalty after a jury found it violated patent laws by using certain technology in its iPhones. A jury in a U.S. District Court in Madison, Wisconsin, has ruled against Apple in a patent infringement case filed in February 2014 by Wisconsin Alumni Research Foundation (WARF) regarding patent 5,781,752.

Internet service providers (ISPs) and their customers could soon be subject to a takedown and potential criminal penalties similar to the DMCA request process. According to a chapter of the final version of the Trans-Pacific Partnership Agreement (TTPA) leaked by Wikileaks, several new criminal penalties will be enforced in the countries that are part of this deal. These include the U.S.

Less than a week after Amazon cracked down on fake reviews by filing a lawsuit, the sale of fake reviews at Fiverr.com still seems to be occurring.  And people still appear to be buying the services. But it’s put a dent in the activity. Amazon sued 1,114 reviewers in Washington state court on October 16, 2015.

Newest Toshiba DynaPad is 2-in-1 with Stylus

There’s a new 2-in-1 tablet coming to market from Toshiba, in collaboration with Microsoft. The company recently introduced its newest dynaPad, a Windows 10 tablet. With boasts that dynaPad is not only a notebook but also can be held and written on the way people write on paper, this one’s for the note takers.

BLOCKS Smartwatch Has Modules, Each Capable of Its Own Function

Smartwatches are trying to find their audience, and even Apple is having a hard time of it as the segment continues to evolve. So, what is the best way to increase the adoption rate of smartwatches? If you ask the people at BLOCKS Wearables, they will tell you they have the answer. It is a modular smartwatch that gives the user more control of the options they want.

HTC One A9 Smartphone Boasts Power and Beauty

In case you are experiencing phone fever with all the new models being announced, here is one more to get your interest up. HTC recently unveiled its newest smartphone, the HTC One A9. And this one is setting itself up as not only a beautiful option but powerful, too. HTC is putting an emphasis on the beauty of the One A9.

Google now has a beta channel for testing the latest features on the Android Google Search app. If you want to test Google Play’s beta service, click here. Testers will receive a testing version of the Google app, Google announced, adding, “Please note that testing versions may be unstable or have a few bugs.

Meet Marshmallow, Newest Android System (Where Do They Get These Names?)

Android 6.0 Marshmallow began rolling out this month and is set to displace Lollipop as the latest Android operating system. But you may not notice too many changes at first glance. Here is a look at some of the more interesting new features. In appearance, there is little change between Marshmallow and it’s sugary predecessor. That’s because Android 6.

The growing mobile market got a boost when the nation’s largest wireless carrier, Verizon, reported it had enlisted an additional 1.3 million wireless customers during its third quarter.
Image: Amazon