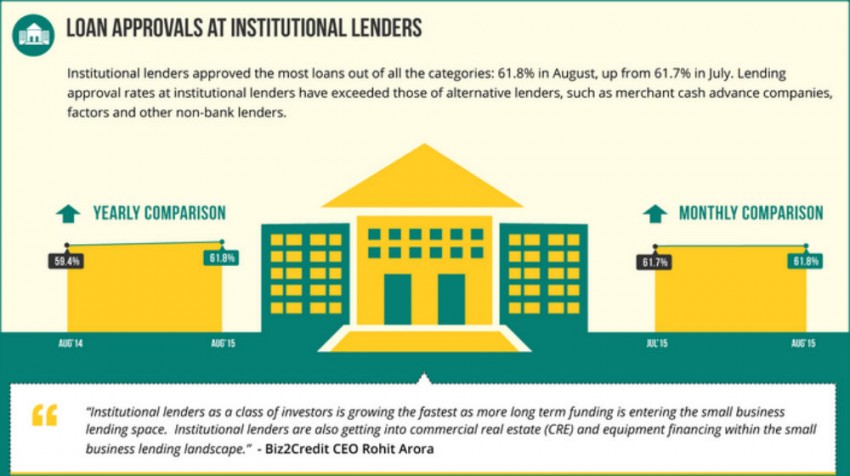 Biz2Credit ascribed the 0.1 point drop to the issues related to the Small Business Administration reaching its $18.75 billion spending cap in late July. The cap included the SBA’s flagship 7(a) Loan Guaranty Program, which guarantees loans to small businesses owned by women, Latinos and veterans.

SBA Administrator Maria Contreras-Sweet sought to avoid the temporary shutdown in late June by writing a request for assistance (PDF) to Congress. Specifically, Contreras-Sweet asked lawmakers to raise the cap to $22.5 billion for the 2015 fiscal year.

Ultimately, Congress raised the program cap to $23.5 billion as reported.

But due to the shutdown, the damage, slight as it was, was done nevertheless, as Biz2Credit noted.

As Rohit Arora, CEO of Biz2Credit explains in a release announcing the index:

“We were disappointed to see that the SBA’s temporary shutdown in July scared some customers away from loans, a factor that hurt big and small banks. Luckily, the drop was not massive and our analysis showed the march of customers towards more online channels is accelerating as the economy picks up and small business owners enter into the year-end busy season.”

Meanwhile, institutional lending continued to grow without skipping a beat both month over month and year over year. Institutional lenders continued the trend of approving the most loans out of all the lender categories. For August, its loan approvals rose to 61.8 percent compared to 61.7 percent in July.

Lending approval rates for these institutions continue to surpass alternative lenders as well, including merchant cash advance companies, factors and other non-bank lenders.

As noted, big banks (those with $10 billion+ in assets) decreased slightly, approving small business loan requests in August to the tune of 22.3 percent compared with July’s 22.4 percent.

Approval rates at small banks dropped by one-tenth of a percent in August, falling to 49.1 percent from July’s 49.2. This marks the tenth consecutive month in which small banks denied more than half of their small business loan requests, according to Biz2Credit’s Index.

Credit unions fell one-tenth of a percent in August over the prior month, approving 42.8 percent of loan applications.

Alternative lenders, which take second place to institutional lenders, remained flat at 61 percent. August marks the third consecutive month that this was the case. This category of lenders’ approval percentages has been declining since January 2014, corresponding with institutional lenders’ emergence as the leading source for the small business lending marketplace.

Founded in 2007 and backed by Nexus Venture Partners, Biz2Credit is an online marketplace for small business funding. Using its proprietary platform to match borrowers with capital sources, it so far has arranged more than $1.2 billion in small business funding for thousands of U.S. companies. Its monthly analysis of small business lending is based on a survey of 1,000 loan applications from its platform each month.