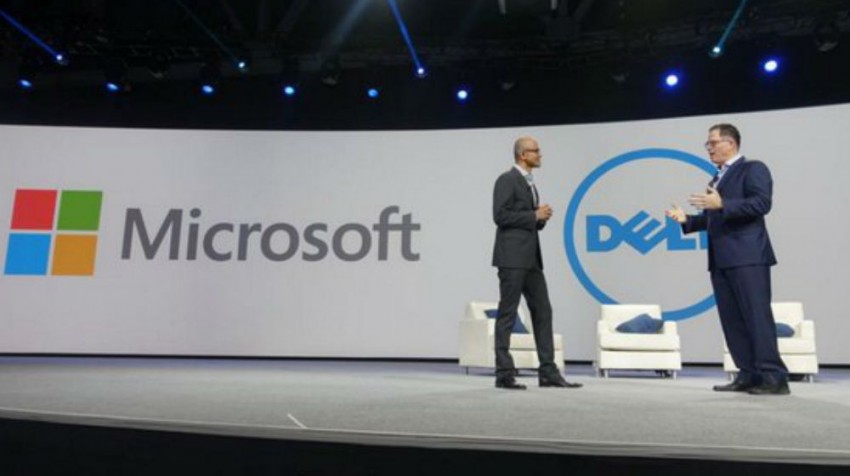 At Dell World 2015, the annual Dell customer convention this week in Austin, the big buzz was about Dell’s acquisition of cloud computing provider EMC, and the announcement of the Dell Hybrid Cloud System for Microsoft. Both are primarily of interest to larger enterprises.

But according to Brent Leary, industry analyst and managing partner of CRM Essentials who attended the event, there was big news for small businesses, startups and entrepreneurs.

Perhaps the biggest news for small businesses is the partnership between Microsoft and Dell.

Dell founder and CEO Michael Dell and Microsoft CEO Satya Nadella, pictured above, sat down on stage together yesterday to discuss that partnership.

Bloomberg’s Emily Chang, who hosted the session between the two, noted that with Dell buying EMC and Microsoft making PCs with its newly launched Surface Book, the partnership could be viewed as surprising. “How would you describe your relationship now? Are you friends? Are you frenemies?”

“We’re absolutely friends,” Dell replied, highlighting how the companies were working together in the cloud space as well as with Windows 10.

Dell pointed out that customers want choices. The partnership between the two brands will give them choices.

Leary observed that the relationship holds benefits for both companies. “Dell appears to be doubling down on the PC market, and sees Microsoft’s Windows 10 as core to the opportunities to sell more PC computers,” observed Leary.

“Michael Dell pointed out that there are 600 million PCs around the world that are four years or older. Michael Dell was emphatic that Windows 10 is the best release of Windows ever. Between that and the age of existing PCs, Dell sees a big opportunity,” Leary added.

But Microsoft also benefits from the Dell partnership, Leary said.

The importance of that fact can’t be understated either, says Leary.

Although Microsoft has its own line of phones, tablets and now a slim laptop PC in the Surface Book, it doesn’t have a full complement of computers. Dell brings that to the table.

Or as Leary says, each brings something to the table that the other doesn’t have or couldn’t duplicate quickly.