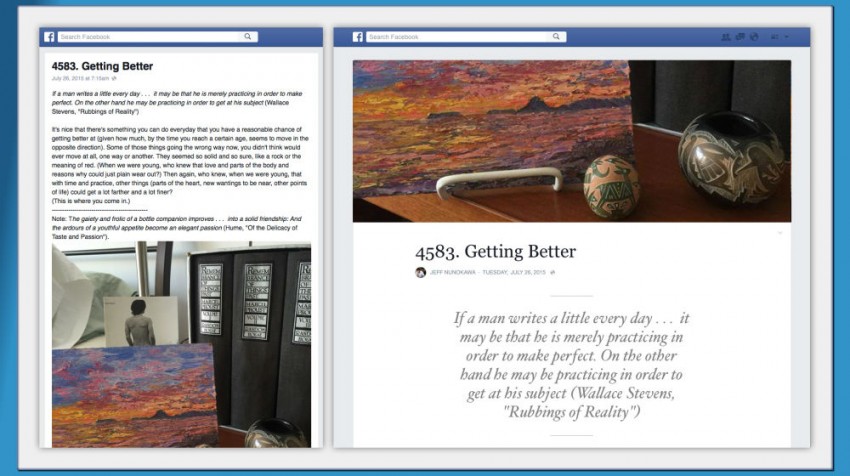 The long-forgotten Facebook Notes feature is finally getting a much needed makeover.

The refreshed feature now comes with exciting new tools to add images, format layout and resize photos — and is available to everyone.

“We’re rolling out an update to make notes on Facebook more beautiful and customizable. Notes are now an even better way to write a longer post and share with anyone — whether it’s a small group of friends or everyone on Facebook.”

The update provides some long overdue customization features for Facebook Notes. Users now have access to some basic text formatting tools such as block quotes, headers and numbered lists. They can also add cover images to each note and bold, underline and italicize text using keyboard shortcuts.

Although some of the formatting options were available in the previous versions, the redesign — with a new font and a more visually enticing layout — adds more elegance to the feature.

Facebook Notes, which was last updated in 2010, has been largely ignored by the company. Notably, founder and CEO Mark Zuckerberg hasn’t used the feature since 2009.

Speculation about Facebook’s plans arose last month after the company said it was testing an update to Notes to make it easier for users to create longer-form stories.

This update gives businesses the opportunity to move to a new content creation platform without even leaving Facebook. Many companies host blogs on their websites while maintaining Facebook accounts. With this change, you may want to either repost your content on Facebook or just replace your blog in favor of Notes.

By choosing the latter option, you will be using a single platform to post both shorter and longer format about your business — though you won’t necessarily “own” it as you do hosting it on your business site.

For businesses struggling to manage their presence on multiple social media channels, it’s perhaps a good idea to use a centralized platform which is also the biggest social networking site.

In the last few months, Facebook has introduced various changes and features to host more content. Some of these include launching an Instant Articles platform, a new embeddable video player and live video streaming. Adding a feature-rich publishing platform would be in line with the company’s strategy to drive content.