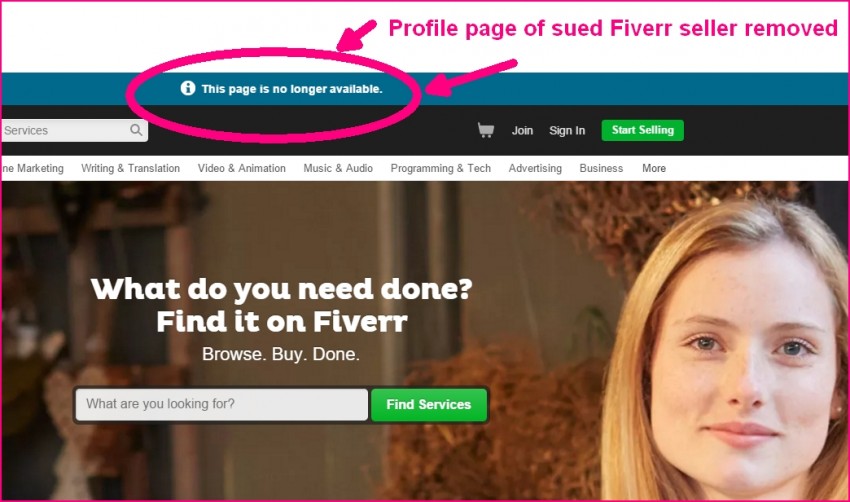 Less than a week after Amazon cracked down on fake reviews by filing a lawsuit, the sale of fake reviews at Fiverr.com still seems to be occurring.  And people still appear to be buying the services. But the lawsuit has started to put a dent in the fake review activity.

Before filing the lawsuit, Amazon conducted an undercover sting operation by “purchasing ‘reviews’ for products and communicating directly with some of the defendants,” the complaint states.   The reviewers who were sued are ones that Amazon claims sold fake reviews for as little as $5.00 each on the services marketplace site called Fiverr (so named because every service is $5.00).

Each of the reviewers who was sued was named by their Fiverr handle in Exhibit A attached to the lawsuit (embedded below).

While Fiverr has its share of spammy services such as fake reviews, the site also has millions of sellers of legitimate services.  For instance, many freelancers who are new will start at Fiverr. They sell services at low rates until they build up a portfolio. For them, Fiverr is a marketing platform and a place to find customers in the vast ocean of the Web.

Fiverr is also a great place if you need a very small service for your business, such as a single image edited. It would be impossible to hire a traditional design agency to edit just one image for $5.00.

Fiverr uses a system of badges, reviews and reputation points to rate sellers. The system is designed to use community reputation to help buyers choose reputable sellers.

Still, for the most part, Fiverr is an example of the free market in action. It is possible for almost anyone to set up a seller account on Fiverr.

That means there’s no barrier to entry for sellers to sell spammy services — other than buyers’ good sense.

This is the second Amazon fake reviews lawsuit.  Back in April 2015, the eCommerce giant filed suit against independent websites and businesses selling fake reviews for the Amazon site.  Those websites have since been shut down.

When our editorial team visited Fiverr.com earlier this week, we found an entire category dedicated to review services.  It had over 4,000 “gigs” or service offerings around providing reviews.

We spot checked the list of the sellers named in the lawsuit.  The profile pages for all two dozen we spot-checked are no longer active. (See image above.)

Yet there are many reviewers still openly advertising that they will post positive Amazon reviews for $5.00.  One brazenly uses a photo of Amazon founder Jeff Bezos to advertise his fake reviews service. 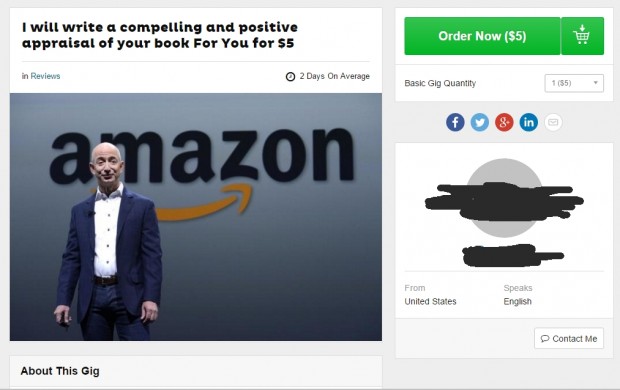 Some sellers offer to post negative reviews, as the profile image below shows.  Negative reviews are used to sabotage one’s competition by making their product look bad. 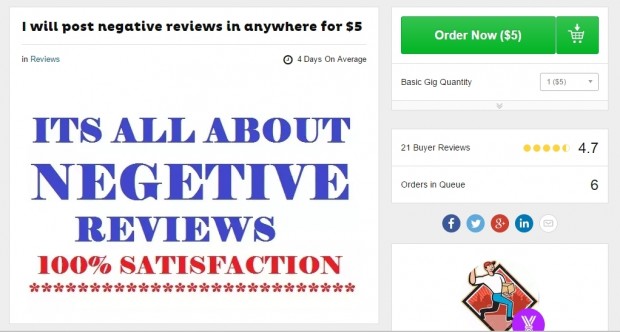 Both positive and negative paid reviews are against Amazon’s review guidelines.  Amazon’s prohibitions are broad enough that any kind of review in exchange for compensation (other than a free copy of the product) is in violation — even if the review is an honest opinion.

One thing we noticed as the week progressed is that fewer fake review services showed up prominently in Fiverr searches.  Whether that lesser visibility is due to sellers hearing about the lawsuit and deciding to voluntarily keep a low profile, or some other reason, is not clear.

Of course, not all sellers on Fiverr offer reviews that are blatantly fake.  Some sellers go to great pains to describe that they will not guarantee a positive review. Rather, they offer only to give their honest opinions.

See Also: Can You Spot a Fake Customer Review of Your Business?

However, there still seem to be plenty of others willing to sell their souls for $5.00.

Risky for Buyers of Amazon Fake Reviews, Too

It’s not just sellers who should be running scared. Buyers of fake reviews such as authors and product sellers run risks, too.

At the very least, fake reviews get removed. Your money is wasted.  Amazon’s algorithms are sophisticated enough to track patterns of activity. Once a fake reviewer is “outed,” it’s easy to trace other paid reviews and delete them.

For an author caught buying reviews, it also can lead to a public relations nightmare.   Author Anne R. Allen advised other authors strongly against buying fake reviews earlier this year on her blog,  warning, “… you could get in big trouble. Soon.”

If you think you will never get caught, think again.

Amazon plans to use the lawsuit to ferret out the identities of the buyers of Amazon fake reviews.  The Amazon lawsuit demands that the Fiverr reviewers provide “information sufficient to identify each Amazon review created in exchange for payment, and the accounts and persons who paid for such reviews.”

Who knows what Amazon will do once it gets that information?