How a Former Michigan Wolverine Uses Periscope To Build Community

Collaboration is engagement on steroids and can pave the way to official partnerships. Former University of Michigan defensive lineman Doug Cohen and his wife, Ally, explain how Periscope drives effective engagement as a crucial first step.

Doug Cohen is a former University of Michigan football player, rock music lover, and dad to two awesome teenagers. Doug and his wife, Ally, own Frameable Faces Photography in the Orchard Mall in West Bloomfield, Michigan. His broadcast for small businesses, named “Steal Doug’s Idea”, airs every Monday at 1 p.m. ET on Periscope through the @frameablefaces account. 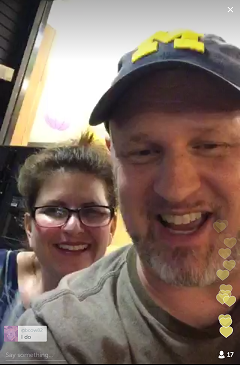 Small Business Trends: Tell us about your business and what Periscope specifically helps with.

Doug Cohen: We’re a photography studio inside Orchard Mall in West Bloomfield, Michigan. One area Periscope helps is simple networking and forming partnerships. There’s an upcoming seminar which is a solid opportunity to increase exposure locally. We might not have been asked to speak at the seminar if we didn’t engage on Periscope. We’ve also connected with peers, which is great for sharing information.

Doug Cohen: This same exact question gets asked about social media, and I answer it with examples. We’ve invited local people I’ve engaged with into our studio, purely as a meeting space. I show them why millions of Periscope users are so enthusiastic, and how it functions. But often the natural conversation will become about our studio and services. Engagement, along with what’s being said about you, and being memorable are the seeds that grow real results. Even if we don’t convert on the spot, I’ve established a relationship. I’ve shown them an innovative, helpful side of me. If they need photography services, they’ll remember us.

Small Business Trends: Let’s get into the do’s and don’ts. What lessons have you learned?

Doug Cohen: There was a point where we were cautious of Periscope’s automated integrations with Twitter, but at the end of the day, the auto-tweets turned out to be a non-issue for us. But other Twitter users might feel differently. Take some time to assess whether certain integrations are helpful or not. Factor in how many times a day you intend to use Periscope. Humor and banter are fun and a big part of Periscope, but don’t get carried away and lose the broadcast’s focus. Be part of the community on Periscope itself, but don’t get sidetracked. Never forget your original business plan for finding and keeping your ideal customer. Orchard Mall has an Internet presence which I’m in charge of. Because of this, we interact with various brands, both small and large, like Panera Bread and Kroeger. Other businesses have noticed what we’re doing, and we’ve turned that attention into collaborations in messaging, and making unique, engaging broadcasts with people we might not have met easily — or at all — without Periscope.

Small Business Trends: What are some downsides to Periscope?

Doug Cohen: Losing focus isn’t just limited to individual broadcasts. There are bigger pitfalls in “too much” Periscope, like studying the countless ways people are using it. You don’t want to wake up one day and realize your core business has suffered. If this starts happening, you need to take control before things turn to chaos.

Small Business Trends: What other types of businesses might benefit from Periscope and how? Do you feel there are industries that shouldn’t waste their time on Periscope?

Doug Cohen: I think any business looking to build relationships can benefit and build community with Periscope. Those opportunities will grow as the platform becomes more pervasive. If a company isn’t looking to grow, they can still strengthen relationships with existing clients and vendors, existing peers, and be industry thought-leaders. If they’re looking for growth, Periscope is great for enhancing key relationships and connections, even internationally.

Can other platforms do this?

Yes, but when we’ve compared all previous platforms, effective networking happens much more quickly on Periscope. The more you consistently engage and become known, the better. Be balanced in sharing interesting, entertaining, and valuable content. Maintain a frequency that makes users look forward to tuning in and sharing your broadcasts out on social. If you do it right, doors will open, and you’ll get word of mouth and growth.

Doug Cohen: We once did a broadcast that went completely off the rails. But it was hilarious and real, just utter madness. We actually think it helped us! And we didn’t even need to block the trolls on that one, because they were strangely part of the madness. If your Periscope broadcasts fall apart like that once in awhile, that’s probably fine. It just can’t happen all the time. Your brand will suffer.

Small Business Trends: Who are some people you enjoy interacting with on Periscope?

Doug Cohen: There are people who are both entertaining and community-minded like Jason Stolken and Malin Morrison. We also love the users who don’t broadcast a lot or at all, but they absolutely love to comment. People like Kim Bowers, Shannon Groskreutz and Stephanie Bynum. They’re always adding value to discussions and interacting with other viewers. Periscope just wouldn’t be the same if these contributors weren’t there, sharing their warmth with us.

Leveraging Low-Code For Business It's important for small businesses like yours to learn how to embrace this technology trend. Save the date and join us at 9AM PT (12PM ET) on September 16th for the live discussion.  Save this Link!
Get Featured