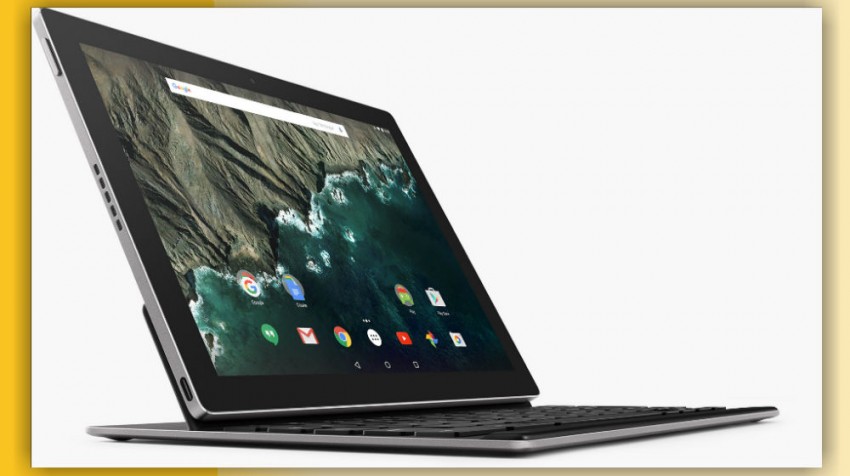 Among the many announcements made at Google’s Nexus event on Tuesday, including two new Nexus phones, the company revealed their all in-house 10.2 inch tablet, the Pixel C.

You may recognize the Pixel name. Google released the original Chromebook Pixel several years ago, the newest version having come out earlier this year. But despite being labeled as the newest addition of the the Pixel family, the Pixel C is not a Chromebook.

Pixel C — C for “convertible” — is a 2-in-1 tablet built end-to-end by Google. That’s right, Google has taken this one on all its own with no other manufacturing partner. This is the first Android tablet built entirely by Google, writes Vice President of Android, Chromecast and Chrome OS Hiroshi Lockheimer on the official Google blog.

On the outside, the Pixel C appears similar to the Chromebook Pixel, especially when the optional keyboard — see below for more on that — is attached. Both have a metal aluminum body and a light-up bar on the back indicating battery life. But that seems to be about where the similarities stop.

Pixel C will be running the new Android 6.0 Marshmallow operating system. The tablet will also be sporting the new USB Type-C port that Google has been using for its newest products.

Google seems to be setting up the Pixel C as a work tablet, giving it a boost over last year’s Nexus 9.

Alongside the latest Android operating system, the Pixel C offers more in the specs department. The tablet includes the NVIDIA X1 quad-core processor, Maxwell GPU, and 3GB of RAM. The Pixel C is sold standard with 32GB of storage but there’s also a 64GB model.

Despite that, it’s the detachable keyboard that Google is really pushing.

The full-sized keyboard attaches to the tablet using magnets, similar to the new iPad Pro Apple revealed at their recent live event earlier this month. Unlike other tablet keyboards however, Google has chosen to use Bluetooth to connect the keyboard to the Pixel C.

Google says the keyboard can support a wide range of positions, tilting anywhere from 100 to 135 degrees without needing a kickstand. The keyboard also charges itself when connected to the tablet. So that is one more battery you might not have to worry about provided you keep your tablet charged.

Pricing for the Pixel C is set to start at $499. If you want the accompanying keyboard though you will have to come up with another $149. Google has not made availability clear, but you can look out for the Pixel C sometime during this year’s holiday season.