Are You Paying Too Little Or Too Much in Sales Commissions? 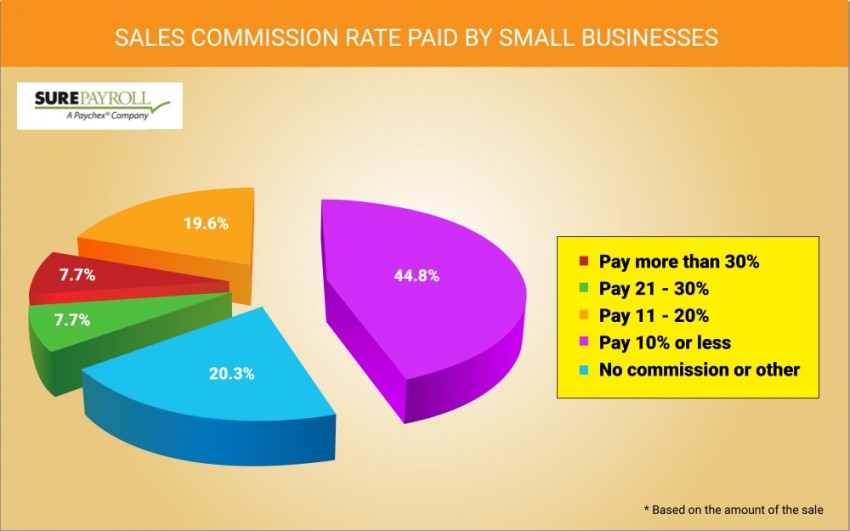 With sales such a critical part of any business’s success, one obvious way to be competitive is in the reward paid to your sales team.

So how do most small businesses pay when it comes to commissions for the people who bring the money in? You might be surprised by the answer.

SurePayroll, a Paychex company based in Illinois, provides a system allowing small businesses to do payroll and make other payments including tax filings.  The sales commission survey covered small business customers of SurePayroll, mainly with 1-10 employees.

And what the survey found about how these businesses dealt with paying sales commissions was particularly eye-opening.

Surprisingly, about one fifth either don’t pay commissions at all, or base them on something other than the face amount of the sale. Some other options include gross profit or net profit.

Here are some of the write-in responses from small business owners who marked the “Other” square on the survey. Some paid:

From the numbers, it appears there’s room for competition among the small businesses surveyed. That’s especially true when it comes to sales commissions.

Are you competitive when it comes to the sales commissions you pay to your team? Ultimately, the question is whether the amount you pay in sales commissions is sufficient to keep one of your most important resources working for you or leaving for greener pastures.

Shawn Hessinger is the Executive Editor for Small Business Trends. A professional journalist with more than a decade of experience in the traditional newspaper business, he has another 10 years of experience in digital media for trade publications and news sites. Shawn has served as a beat reporter, columnist, editorial writer, bureau chief and eventually managing editor with responsibility for nine weekly newspapers, the Berks Mont Newspapers. He is also a member of the Society of Professional Journalists.
2 Reactions
Subscribe
Follow @smallbiztrends
RSS LinkedIn Pinterest iTunes