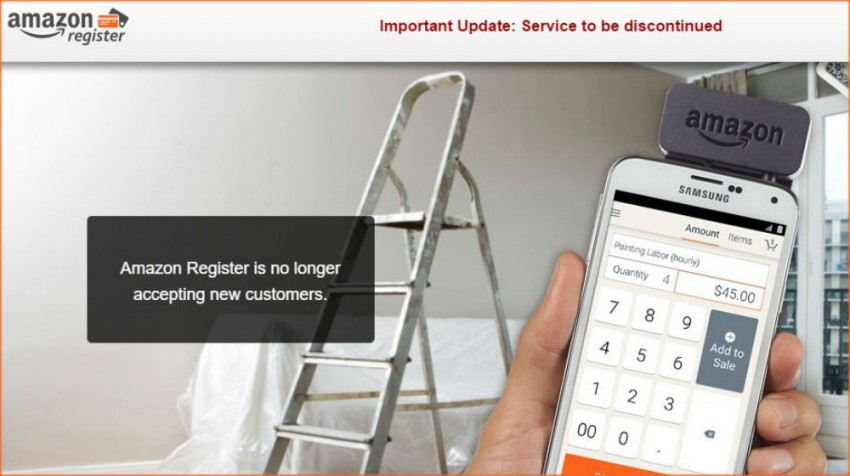 Amazon is shutting down Amazon Register, its mobile point-of-sale (POS) system that was launched a little over a year ago. The online retail giant is no longer taking on new Amazon Register customers. And those already using the it have until Feb. 1, 2016 to find another service. After the February date, Amazon will kill the Amazon Register service altogether.

Amazon Register is a credit card reading device and mobile app that can be used by businesses to process credit card transactions through mobile devices. The service was created to compete with other low-cost mobile point-of-sale systems like Etsy, PayPal Here and the Silicon Valley IPO hopeful, Square.

However, processing payments is tricky business to profit from and often, many companies that are into it have to operate on thin margins. In order to stay competitive and succeed in such a space, service providers have to have clients that move huge amounts of money. And this somehow rules out many small businesses.

Amazon Register transaction rates were way cheaper than its competitors, meaning they were probably not making much profit off the service. Lower fees also couldn’t replace Square’s four-year head start. The retail giant also likely struggled to get widespread usage of the service among small businesses, a segment that Square has long dominated.

The company didn’t offer much of an explanation about the closure, only stating, “Effective October 30, 2015, we are no longer accepting new customers. Existing customers can continue to use Amazon Register until February 1, 2016, when we will discontinue the service. We regret any inconvenience that this may cause.”

Meanwhile, the company is also ditching Amazon Local daily deals, “We are only going to stop selling daily deals for local merchants at local.amazon.com and on the Amazon Local app. Amazon’s Deal of the Day, Gold Box Deals, and Kindle Daily Deals are not affected by this announcement.”

The recent moves by Amazon are clearly part of a strategy shift. Rather than helping merchants with their eCommerce businesses, the retail giant wants them to sell directly on its marketplace, where it will be involved in all parts of the sale process.