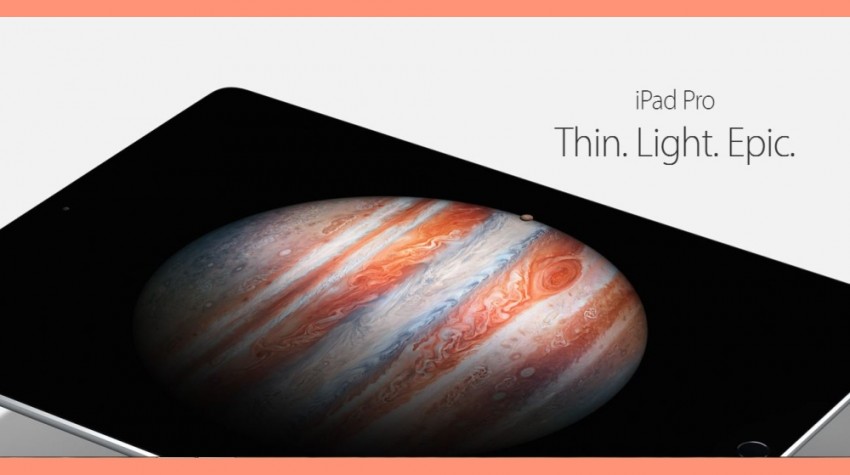 For those of you who have been anxiously waiting for the release of the super-sized 12.9 inch iPad Pro, the wait is now over. The new Apple device has been released, along with a new Smart Keyboard and the device’s stylus, the “Apple Pencil.”

The large iPad Pro was released simultaneously in 40 countries, including the U.S., U.K., China and Japan, and according to a press release, will arrive in Apple authorized resellers, Apple retail stores, and select carriers “later this week.” The iPad Pro will start selling for $799 in the U.S.

Apple first unveiled the iPad Pro back in September and since then a vague “Available November” tag has been adorning any mention of the iPad Pro on Apple’s website, but that’s of course no longer the case.

The new iPad Pro isn’t just a larger screen. It features a beautiful high-def 12.9-inch screen with 5.6 million pixels, the most ever in an iOS device. The large screen allows for split, “full-screen” multi-tasking. The multi-touch screen uses the new 64-bit A9X chip that is 1.8X faster than the A8 before it. The iPad is thin, light and features all-day 10-hour battery life, Touch ID, an 8 MP iSight camera, and more.

“The early response to iPad Pro from app developers and our customers has been incredible, and we’re excited to get iPad Pro into the hands of customers around the world this week,” said Philip Schiller, Apple’s senior vice president of Worldwide Marketing. “iPad Pro is the most powerful iPad we’ve ever made, giving users the ability to be even more creative and more productive with the epic 12.9-inch Retina display, powerful 64-bit A9X chip and groundbreaking Apple Pencil and new Smart Keyboard. We can’t wait to see what they do with iPad Pro.”

The iPad Pro will specifically be helpful to educators, developers of next generation advanced apps and, of course, business owners and creative professionals, thanks to its high-resolution and use of a pressure-sensitive Apple Pencil that encourages creativity.

For example, the ability to manipulate a 50-megapixel image right on iPad Pro in Photoshop Fix and then send that image to Photoshop CC on a desktop, for further refinement, is the kind of industry-advancing collaboration that millions of Adobe and Apple customers will benefit from.”

Since the iPad Pro is quite large, you will also need Apple’s Smart Keyboard. This is the first iPad keyboard to offer a full size set of keys. The Smart Keyboard pairs to the iPad via a new Smart Connector that’s positioned at the bottom of the iPad Pro.

Apple revolutionized the entire personal technology industry with the 1984 introduction of the Macintosh. Today, the company leads the world with innovative products, including Mac, iPad, iPhone, Apple TV and Apple Watch.

The company also boasts four software platforms, including tvOS, watchOS, OSX, and iOS. These platforms provide Apple users with seamless experiences across all Apple devices. Apple has about 100,000 employees.

The company is, without a doubt, positioning the iPad Pro as a highly-dependable and efficient tool that’s capable of replacing full-sized desktop computers. In an interview with the Telegraph, Tim Cook, Apple’s CEO says: “Yes, the iPad Pro is a replacement for a notebook or a desktop for many, many people. They will start using it and conclude they no longer need to use anything else, other than their phones.”
Image: Apple