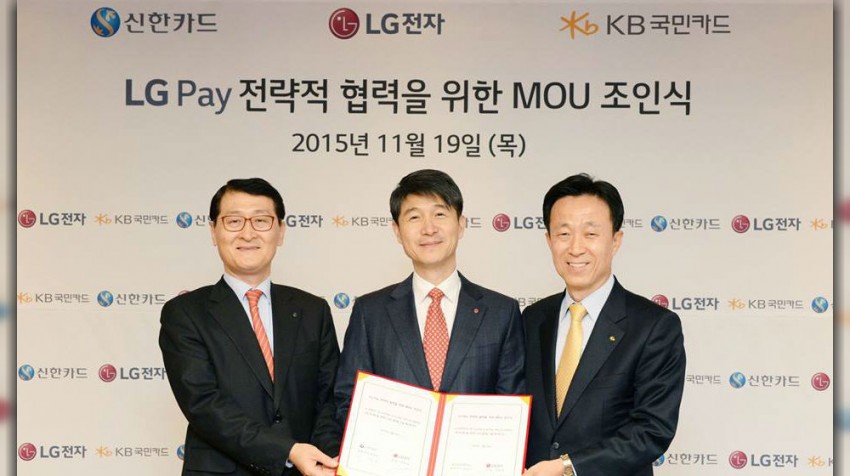 Cash may be king, but having to deal with it is one of the biggest inconveniences for a small business. It is labor intensive and carries with it a lot of security risks. So the addition of one more smartphone manufacturer – LG – entering the mobile payment segment will be welcomed by businesses and individuals alike.

The Korean phone maker announced on its Facebook page it has formed a partnership with Shinhan Card and KB Kookmin Card to launch LG Pay.

The announcement of the partners, which are Korean based, indicates LG is probably going to offer its service in South Korea first, and move to other countries in the region and the rest of the world in the future.

As one of the most advanced countries in the world when it comes to mobile technology, it will be a great testing ground for LG. However, this means it will take that much longer to introduce the service in other countries, where Apple, Samsung and financial institutions like Chase are making headway.

The company didn’t give details about its mobile payment solution other than, “It’s official! We have partnered with Shinhan Card and KB Kookmin Card to prepare for the launch of LG Pay” on its Facebook page.

When Apple Pay entered the mobile payment segment, it gave the technology more legitimacy, which led some of the biggest financial institutions and retailers signing on to accept the tech giant’s payment system.

Apple was soon joined by Samsung, which came in a little later, but brought with it a large user base to its mobile payment system.

So it was inevitable financial institutions would also start providing their own mobile payment platform, and one of the largest banks in the world, J.P. Morgan Chase, announced Chase Pay earlier this month. Unlike propriety solutions of mobile manufacturers, the Chase platform will work on Android and iOS phones regardless of maker.

The battle between financial institutions and device manufacturers is going to heat up as they compete for the same customer base. Consumers have to make the tough choice of trusting their digital cash to a technology company or a financial organization.

Deloitte also has a positive outlook for the platform, and in its TMT Predictions 2015, it said, “Retailers should consider for main benefits: reducing the need to protect customer data, the higher speed of contact-less transactions relative to other payment means, the ability to attract consumers with higher disposable incomes, and the opportunity to provide more personalized experiences, for example by integrating loyalty schemes.”

There are many small businesses that think they can’t get away from just being cash only, but that is no longer the case because of mobile payment systems. Everyone from flea market operators to street vendors, which have been traditionally cash only, can use mobile payment to bring even these ancient forms of commerce to the 21st Century.