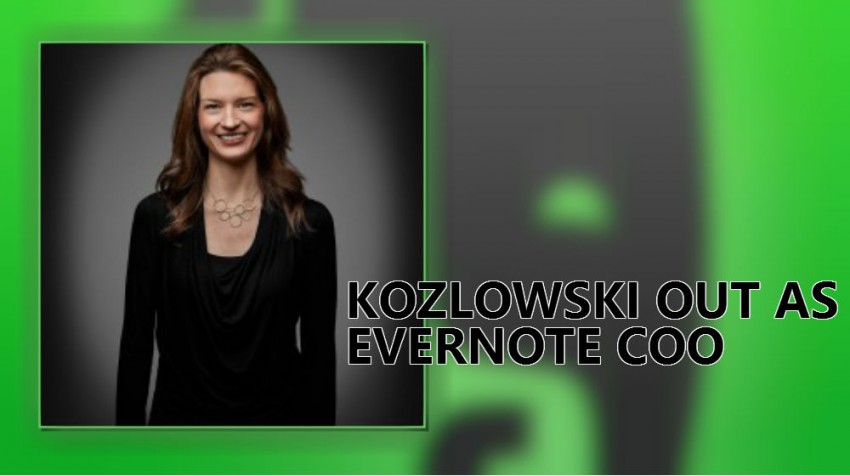 Just four months after being promoted to COO, Evernote’s Linda Kozlowski has reportedly handed in her resignation letter.

TechCrunch, citing unnamed sources, said: “We’ve confirmed through multiple sources that Linda Kozlowski, Evernote’s COO, has put in her notice and will be leaving the company by the end of this year.” The post also says that at least four more executives may be leaving in coming months.

The abrupt leave of Kozlowski after a short stint in the role underscores the upheaval at Evernote at the moment.

However, the company has in recent days been slammed for lack of product focus. They seem to be in disarray, rolling out and closing a variety of vertical apps and services, putting a lot of resources on physical goods when their core business is an app. They have also been criticized for failing to convert enough people from freemium service to paid tiers.

It doesn’t come as a surprise that the company’s execs are leaving, considering this year alone has seen Evernote appoint a new CEO, closed offices, laid off people, and killed off products.

The rumored departure of Kozlowski is however surprising, as she has been a key person in Evernote’s growth into new business areas and markets.

Announcing Kozlowski’s appointment to COO in June, Phil Libin, Evernote’s former CEO said, “During her tenure, Linda has worked tirelessly to bring Evernote to individuals and teams around the world. As VP of Worldwide Operations, she ran all of Evernote’s global initiatives and oversaw the expansion of Evernote into China and Brazil. More recently, Linda directed Evernote’s global pricing strategy, which culminated in the successful launch of the new Evernote Plus and Evernote Premium tiers.”

T. Rowe Price, in a report released over summer, says that its valuation of Evernote had dropped by about 26 percent in the first six months of this year. The mutual fund’s New Horizons Fund had about 25.5 million in Evernote private shares at the end of 2014, but by the end of the first half of this year, those shares had dropped in value by about 26 percent to 18.8 million.

The drastic decline of Evernote’s valuation, together with its in-house troubles, currently highlights the need for stability and security if your business is to operate effectively.