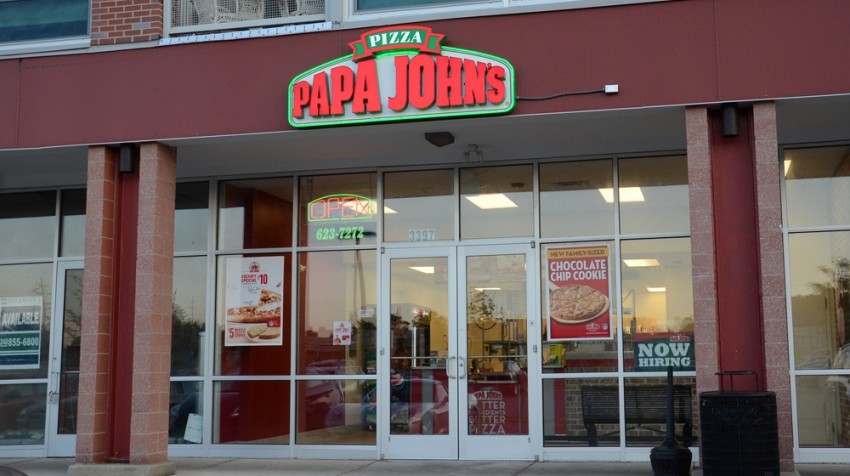 A Papa John’s franchise owner tried to make a buck off his employees’ backs, and now he is paying the price.

Abdul Jamil Khokhar, the owner of nine Papa John’s Pizza locations in New York City along with BMY Foods, has pleaded guilty to not complying with the state’s labor laws, which is a misdemeanor, and to filing false business records, a felony.

Instead of paying employees the proper minimum overtime wages as required by New York State law, Khokhar paid them the minimum wage rate they would receive for working regular hours. He tried to hide his illegal activities by creating false identities under which he filed employees’ overtime hours, making it appear as if other workers were actually working those extra hours, so he wouldn’t get nabbed for not paying the overtime. Fortune notes that about 300 current and former employees were affected.

“Wage theft is a crime, and a Papa John’s franchisee is now going to jail for cheating his employees and trying to cover it up,” state Attorney General Eric Schneiderman said in a press release. “My office will do everything in its power to protect the rights of New York’s workers and make sure that all employers — including fast food restaurants — follow the law.”

New York’s minimum wage is $8.75, and this is expected to increase to $9 by the end of the year, per the state Labor Department.

Both the federal and New York law require employers to pay their workers at least the minimum wage for 40 hours per week and any extra hours should be paid time-and-a-half, the regular rate. However, Khokhar along with BMY Foods tried to game the system, paying his employees regular wages for overtime hours, by creating the fake workers that were part of the alleged scheme.

As part of a separate settlement with the Labor Department in July, Khokhar agreed to pay $230,000 in back pay for his workers, $230,000 in damages and $50,000 in civil monetary penalties. He will also spend 60 days in jail as part of his sentence.

This could all have been avoided had Khokhar done the right thing in the first place.

The Labor Department and Schneiderman’s office have been aggressively pursuing wage-and-hour violations by fast-food operators in New York State. In October, Bizjournals published a story about four Papa John’s franchisees that were asked to pay half a million dollars to 250 workers who were allegedly shorted their wages at nine restaurants in the Bronx, Brooklyn and Queens. In another case, two other Papa John’s franchisees were asked by the court to pay nearly $3 million.