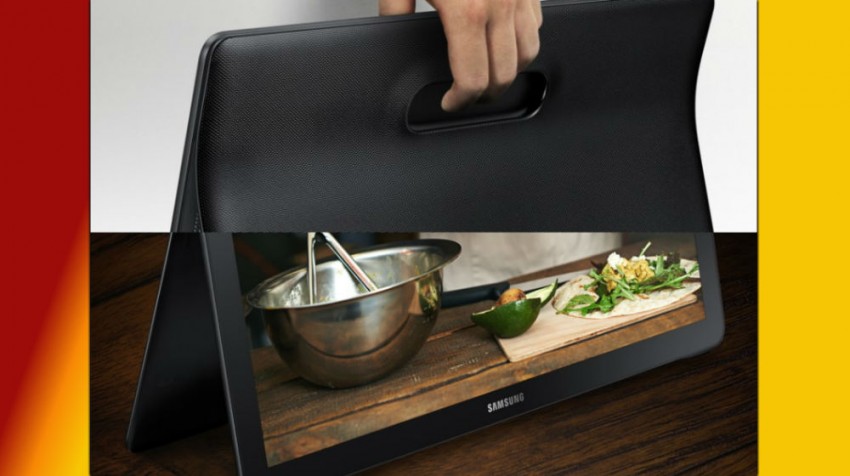 The massive device, which is a cross between a tablet and a TV, is designed for video streaming.

Reports of Samsung working on the product under the code name Tahoe have been going around lately, generating a lot of interest in the tech circles.

The company teased the public with a glimpse of the tablet at its Gear S2 launch event at IFA Berlin earlier this year.

With Galaxy View, Samsung “wanted to rethink how you’re consuming content and how you’re accessing that content,” Dennis Miloseski, the vice president of Samsung Design in America told Mashable.

Attractive Features of the Galaxy View

Samsung’s CEO and IT and Mobile Business head J.K. Shin has said that Galaxy View will provide “an entirely new way of consuming mobile video and entertainment.”

Some of Galaxy View’s unique features back up Shin’s claim and make it extremely attractive for both personal and business use.

To begin with, the device provides an entertainment-based experience with a grid like home screen that features shortcuts to all popular video streaming apps like Hulu, YouTube, Netflix, and more. It has a responsive touchscreen and Android 5.1.1 Lollipop runs smoothly on it.

For business purposes, there are quite a few features worth looking at.

The 2.1 megapixel front facing camera is ideal for video calls and Samsung claims its 5,700mAh battery will keep the device running for 8 hours of continuous streaming.

But what’s perhaps most interesting about Galaxy View is its portability. Its kickstand comes with a built-in handle, which means it can be easily moved from one place to another. Moreover, the tablet is considerably light, weighing only 2.65 kg. There are also two 4-watt speakers that enhance audio experience.

For professionals constantly on the move, these features could prove beneficial.

Galaxy View is yet another innovation from Samsung that pits the company directly against Apple.

In the last three years, the South Korean company and Apple have clashed several times, spending billions to gain an edge.

Galaxy View will be available in the U.S. for $600 beginning November 6.