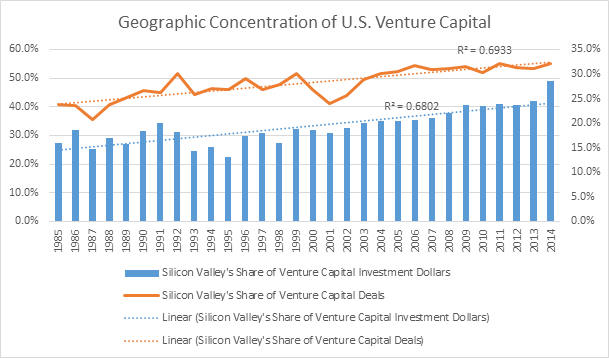 Not only has Silicon Valley been the place to go for venture capital for over 40 years, its position has become more dominant.

Not everyone agrees. In a recent Harvard Business Review article, Ian Hathaway of the Brookings Institution argued that venture capital investments have become less concentrated in traditionally strong locales like Silicon Valley. Focusing just on initial rounds of venture capital between 2009 and 2014, he found that “a non-trivial amount of catch-up by other cities has occurred.”

This pattern might be true for initial financings in just the past few years. Moreover, investment activity might be diffusing out from secondary locales like New York, Boston and Austin to tertiary locales like Cleveland or Madison. But would-be Unicorn founders, do not delude yourselves! If you want venture capital, go to Sand Hill Road.

Over the past 30 years, venture capital activity has become even more concentrated in Silicon Valley than it was when Bill Gates was the poster child for young entrepreneurs.

The chart above shows the change in the Silicon Valley fraction of U.S. venture capital deals and dollars from 1985 to 2014. The red line in the chart shows the deals, while the blue bars show the dollars. The dotted lines show the linear trend, red for deals and blue for dollars.

While the linear trend is far from perfect — an R-squared of 0.69 for deals and 0.68 for dollars — the pattern is clear. More venture capital activity is concentrated in Silicon Valley now than in the late 1980s.