How Did Christmas Become Commercialized? 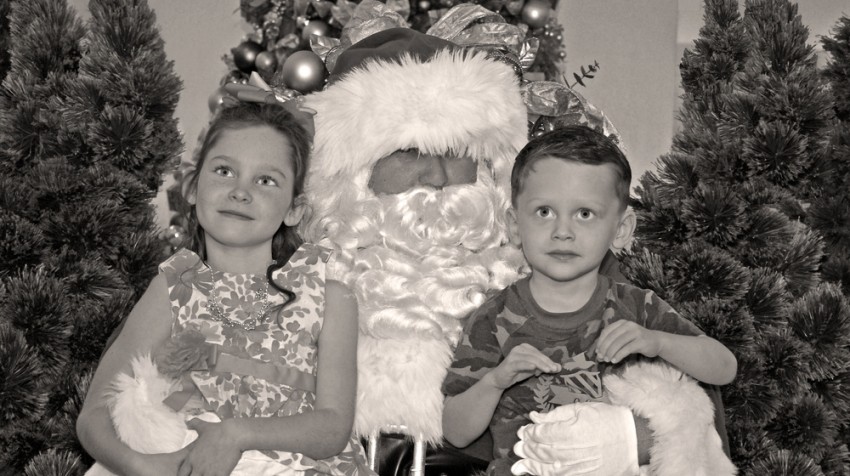 From gift wrapping to Christmas trees, department store Santa’s and beyond, what started as a religious holiday has taken on commercial significance.

Entrepreneurs, marketers and businesses large and small have certainly all played a role. But how did Christmas become so commercialized? Read on for a detailed overview.

It was F.W. Woolworth who first brought glass ornaments from the German cottage industry to the mass market in the US. In 1880, $25 worth of hand blown glass ornaments were purchased for his variety store in Lancaster, PA – all of which sold within two days. Fast forward to ten years later and more than 200,000 glass ornaments made from more than 6,000 recorded designs, each by individual families, were being imported into the US.

The rest is, as they say — history.

The first documented Christmas tree in the US was recorded in 1747. This was in Bethlehem, PA at the Moravian Church settlement there and it was reportedly a wooden triangle covered in some evergreen branches.

Santa Claus – as We Know Him

In the early part of the 20th century, Santa Claus (otherwise known as “Sinterklaas” in Dutch) was rather spooky looking and certainly not the jovial fella’ we’ve all come to know and love in modern times.

Nothing really – other than the influence of Coca Cola and some well executed holiday marketing. 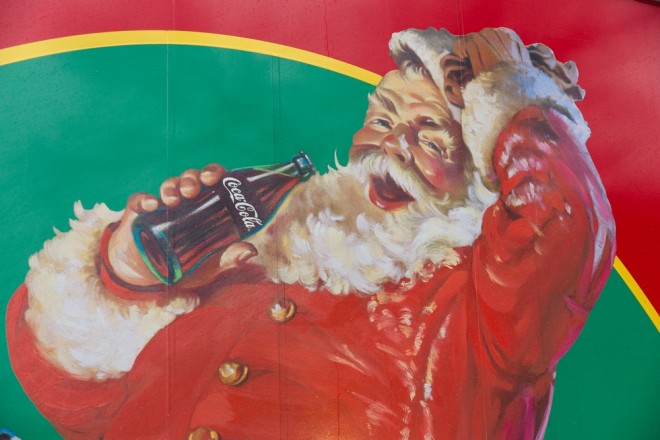 Coca Cola ads featuring Santa Claus first began in 1920 in the Saturday Evening Post. By 1931, Santa was making appearances in Coca Cola ads in popular magazines, but a more wholesome Santa was desired. It was then that Coca Cola commissioned an illustrator by the name of Haddon Sundblom.

That year, in 1931, a more jolly Santa Claus appeared in National Geographic, Ladies Home Journal, and the New Yorker among others. Sundblom’s work and his version of Santa Claus (pictured above) in those years is now some of the most desired depictions of holiday advertising (and Santa Claus himself) for Christmas collectors and advertising collectors alike. The original artworks are housed in the Coca Cola archives and they have since been exhibited all over the world. 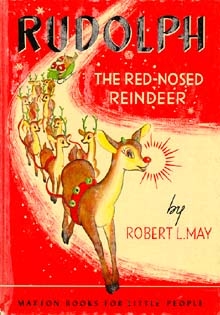 Ah, our “deer” Rudolph. This little guy wasn’t born under a hemlock tree in the forest. Oh no. Our dear Rudolph (who was almost named Reginald) was born — at Montgomery Wards. Yes, that’s right. He’s another example of genius marketing, timed just right. Rudolph was born from a massive marketing campaign in 1939 in a book written by a company advertising copywriter by the name of Robert L. May.

The purpose? To drum up newspaper coverage.

The book Rudolph the Red Nosed Reindeer was authored by May and was then given away for free. (More than 2 million copies were distributed during a time when 50,000 was considered huge).

“Then how all the reindeer loved him, as they shouted out with glee, Rudolph the Red-Nosed Reindeer . . . you’ll go down in history.”

Black Friday stemmed from the tradition of department store parades sponsored around Thanksgiving that were meant to kick off the holiday shopping season and push consumers into stores. The term “Black Friday” first started to appear in the mid 1960’s, but didn’t really catch on until about two decades later in the 1980’s. The first documented use of the term was in 1961 in a statement made by Denny Griswold of Public Relations News:

As you can see, those suggested terms never caught on. However, in the mid-80’s, retailers began to divulge that the term was actually in reference to the day after Thanksgiving being the first day profits would move out of the red – and into the black. Ka-ching!

When it comes to Cyber Monday, this too was birthed from marketing by a division of the National Retail Federation, Shop.org, in 2005.

When it comes to holiday treats like candy canes and the Yule Log, both have a long history dating back centuries.

“The Christmas Candy Cane originated in Germany about 250 years ago. They started as straight white sugar sticks. A story says that a choirmaster, in 1670, was worried about the children sitting quietly all through the long Christmas nativity service. So he gave them something to eat to keep them quiet.”

“The history of the Yule log cake stretches all the way back to Europe’s Iron Age, before the medieval era. Back then, Celtic Brits and Gaelic Europeans would gather to welcome the winter solstice at December’s end. People would feast to celebrate the days finally becoming longer, signaling the end of the winter season. To cleanse the air of the previous year’s events and to usher in the spring, families would burn logs decorated with holly, pine cones or ivy. Wine and salt were also often used to anoint the logs. Once burned, the log’s ashes were valuable treasures said to have medicinal benefits and to guard against evil.”

Shopping Mall Santas started in 1841 at a Philadelphia store that had a life-size model of a Santa Claus that drew children to it. This spawned a trend in which store owners offered opportunities to see a real “live” Santa.  Scroll down in this story for more and check some other references to see if we can find the name of that store in Philadelphia. R.H. Macy of Macy’s in New York City was one of the first department store owners to construct special holiday presentations. And in 1862, he was the first to feature an in-store Santa for children to visit. By the 1890s, the Salvation Army had begun the practice of sending “Santas” into the streets of New York City to solicit donations to pay for holiday meals for the needy.

“Gift-giving has its roots in pagan rituals held during the winter,” the Christian Science Monitor reported. Also the twelve gifts associated with Hanukkah have contributed to the gift giving bend of the season.

Started in 1966, WPIX-TV (Channel 11) in New York City filmed the fireplace of then-Mayor John Lindsey at Gracie Mansion, the official mayor’s residence. The fireplace was aired with easy listening music in the background. The station cancelled advertising and a roller derby show to air the fireplace, which has become an iconic image of the holidays.

About the tradition of Christmas Cookies, The Culinary Life noted:

“Cookies have been around a long time (they probably originated as drops of grain paste spilled on hot rocks around a fire), but they became associated with Christmas in Europe in the 1500s. Gingerbread was a similar food, but laws restricted its baking to guildsman, however at the holidays these regulations were relaxed and people were allowed to bake their own at home, making a very special once a year treat.”

When it comes to the tradition of Christmas Dinner, The Mirror reported:

“The rich would have eaten goose and woodcock for Christmas dinner and, with the king’s permission, swan. The birds were covered with butter and saffron and then roasted. The poor could sometimes get goose from the Church, although it would cost up to 7 pence – then around a day’s wages. Venison was also on the menu for the rich and sometimes the poor would be allowed to have the deer’s leftover parts – such as the heart, liver, tongue, ears and brain — known as ‘umbles.Mixed with whatever else a cook could get, they were made into a pie — known as ‘umble pie.”

Elf on the Shelf

Alternatively panned as creepy and adored as a fun holiday ritual, the trademarked Elf on the Shelf dates back to 2005, when author Carol Aebersold self-published a tale of a little elf sent by Santa to report on children’s behavior leading up to Christmas. A toy elf sold with Aebersold’s book plays that role in thousands of homes around the country.

As mentioned earlier, store sponsored parades were from the beginning a tradition driven by marketing more than by any other motivation. But the tradition did not start with the store now most associated wit a famous holiday parade.  As History.com explained:

The idea of a store-sponsored Thanksgiving parade did not originate with Macy’s, however, but with Philadelphia’s Gimbel Brothers Department Store, which first staged a Thanksgiving procession in 1920 with 50 people, 15 cars and a fireman dressed as Santa Claus who ushered in the Christmas shopping season. Like Macy’s, J.L. Hudson’s Department Store in Detroit also planned a similar event in 1924. In New York, however, the only Thanksgiving parade that had previously passed through the city’s streets was its peculiar—and to many, annoying—tradition of children painting their faces and donning tattered clothes to masquerade as “ragamuffins” who asked “Anything for Thanksgiving?” as they begged door-to-door for pennies, apples and pieces of candy.”

Wrapping paper in some cultures, most notably Japan and Korea, goes back many centuries. But here in the West, wrapping presents  in pretty paper dates back at least to the Victorian era. Today it is a $2.6 billion industry.

“R.H. Macy of Macy’s in New York City was one of the first department store owners to construct special holiday presentations. And in 1862, he was the first to feature an in-store Santa for children to visit. Several years later, in 1874, he created one of the first major holiday window displays with a collection of porcelain dolls from around the world and scenes from Harriet Beecher Stowe’s ‘Uncle Tom’s Cabin.'”

And where did Santa’s reindeer originate? Well, website AltogetherChristmas.com said:

“The first known written account of reindeer in association with the legend of Santa Claus occurred in 1821. That year, New York printer William Gilley published a sixteen page booklet titled A New Year’s Present, to the Little Ones from Five to Twelve Number III : The Children’s Friend by an anonymous author. In the book, reindeer are introduced into the Santa Claus narrative”