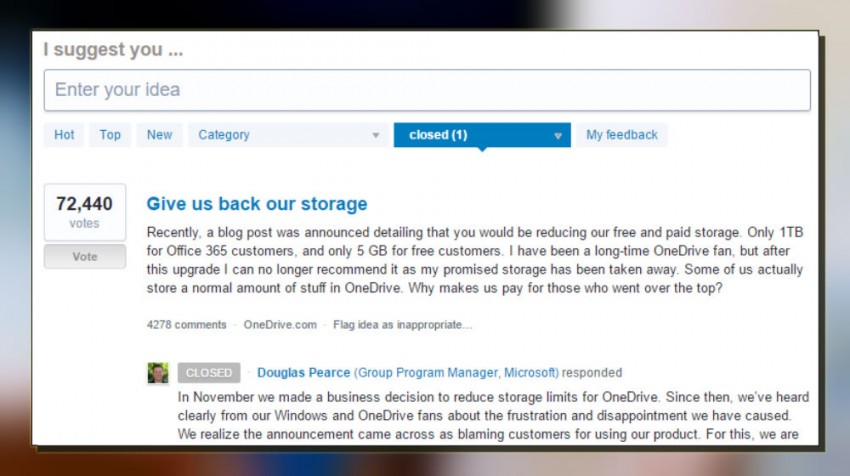 This November, Microsoft angered many when it announced it would end the unlimited OneDrive storage option for Office 365 users. The decision was met with some strong reactions from users who signed an online petition, demanding their storage be given back to them.

Following the backlash, Microsoft has taken a step back and returned some storage to its users.

In a post published on its OneDrive user forum, Douglas Pearce, Group Program Manager, explains, “While we are not changing our overall plans, we’d like to clarify what we are doing for customers impacted by the changes and share a new offer which we hope will go a long way in making the situation better for our biggest fans.”

When it announced its decision to stop offering unlimited storage for OneDrive users, Microsoft had blamed “a small number of users” for backing up numerous PCs and storing entire movie collections and DVR recordings.

The company has now apologized to users. It says, “In November, we made a business decision to reduce storage limits for OneDrive. Since then, we’ve heard clearly from our Windows and OneDrive fans about the frustration and disappointment we have caused. We realize the announcement came across as blaming customers for using our product. For this, we are truly sorry and would like to apologize to the community.”

In plain terms, Microsoft isn’t moving away from its stand on ending unlimited OneDrive storage. Rather, it is offering some concessions to irate users. To begin with, the company is going to allow OneDrive users to keep their 15GB of free storage and the 15GB of camera roll bonus.

Subscribers who used OneDrive’s free service to store more than 5GB of data will receive one free year of Office 365 Personal, which includes 1TB of storage.

Any Office 365 home, personal or university programs user who received more than 1TB of storage in the past will be able to retain it for at least 12 months.