New York Cracks Down on Short Term Rentals and Airbnb 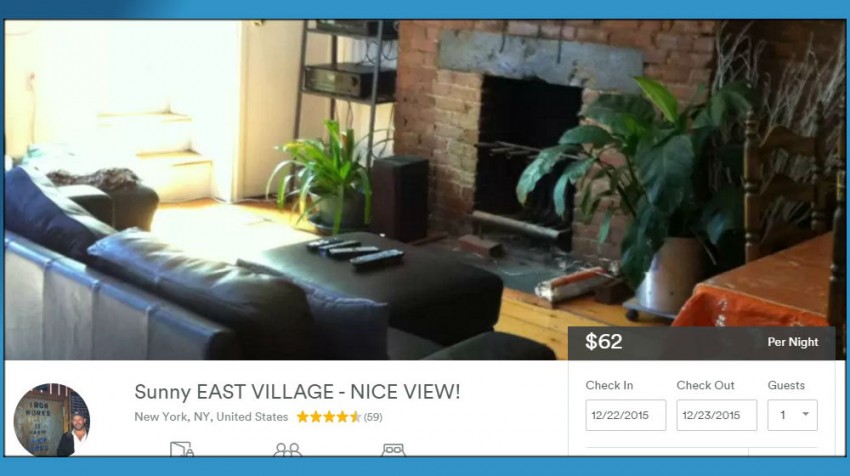 New York entrepreneurs may find it tougher to earn from short term rentals in the future. A new bill, if passed, would impose stiff penalties for advertising short-term rentals.

Since its founding in 2008, home-sharing site Airbnb has made it easier and safer for people to search for and find short term rentals in homes, condos and apartments. The site revolutionized the concept of finding a place to stay when vacationing or traveling.

Instead of going to a traditional travel site and searching for a hotel room, travelers on tight budgets simply go to the Airbnb site and search for a short term rental.

Most often the rates found on Airbnb are a fraction of the cost of a hotel room.

A recent search yielded rates well under $100 per night. (See screenshot from Airbnb.com above showing a room in New York’s East Village for $62 a night — far less than a decent New York hotel room.)

Airbnb’s popularity hasn’t just helped travelers.  It also has been a boon to entrepreneurial types.

Budding entrepreneurs discovered they could make money from renting out their abodes for short periods of time.

But the state of New York doesn’t necessarily view that as a good thing. In New York, short-term rentals have been a violation of hotel laws since 2010. The state is now contemplating bringing its crackdown to the next level.

A bill being sponsored by New York  State Assembly Member Linda Rosenthal (D-Manhattan) would impose fines of $7,500 per violation on anyone advertising apartments for less than a 30-day rental.

In a story in the New York Daily News on December 21, 2015, Rosenthal claims the bill is designed to target those who would drive up New York housing costs.

Rosenthal (pictured) is quoted as saying, “What this bill is targeting is people or companies with multiple listings. There are so many units held by commercial operators, not individual tenants. They are bad actors who horde multiple units, driving up the cost of housing around them and across the city.”

Of course, others might suggest it is a bid to protect hotel operators in New York, especially Manhattan. As columnist McArdle observes in Bloomberg View, the city’s powerful hotel lobby likes the shortage of affordable rooms in the city just fine as it is.

What’s clear is that it also imposes an added regulatory burden on New York landlords. Landlords would be required to notify tenants that short-term rentals may violate their leases, is illegal and they could face eviction.