Only 3 Percent of Small Business Reported a Bad Year, Per SurePayroll 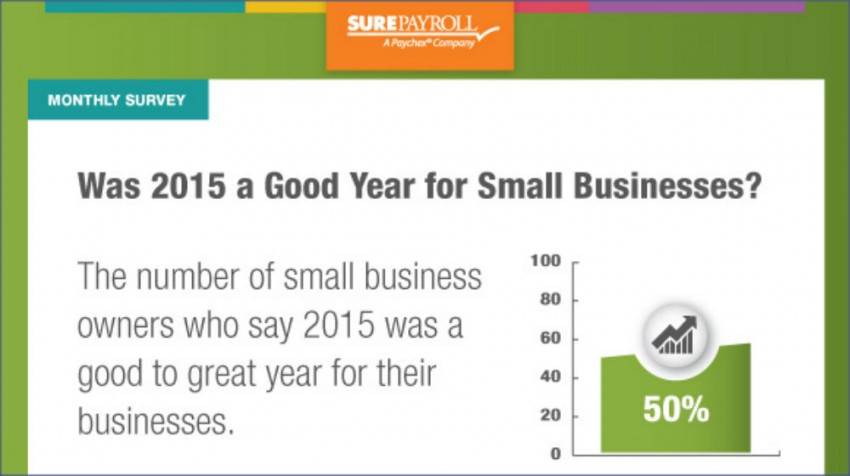 Small business owners generally operate with slim margins, and when a good year comes along it is a cause for celebration.

“I don’t think we can say we’re seeing any kind of a boom period, but definitely a positive trend, and our data is coming from a diverse set of businesses,” said SurePayroll General Manager Andy Roe.

From best to worst, 12 percent had the best year they’ve ever had, with 38 percent stating it was good to great. A little over a third or 36 percent had an average year, and the remaining 11 percent experienced a below average year, but not bad.

As for their outlooks regarding growth, 54 percent expect a certain percentage growth every year, while 28 percent expect it to remain the same year to year, with 18 percent reporting it is hard to predict.

The goals of the survey participants were also different, with 45 percent indicating profit is not their only motivation. For them, the most important metric is to grow total revenue as well as the size of their customer base. To drive this growth, owners said in 2016 they will better manage their expenses, implement new technologies and equipment.

One survey participant said, “I consider my first year of business to have gone better than what I expected. I am very enthusiastic about next year and the years to come.”

While the overall outlook was positive, Stefan Schumacher of SurePayroll  said the construction, insurance and medical industries faced some challenges, with low profit margins, law restrictions and benefit cut backs affecting the sectors in that order. The segments that saw increased demand included information technology, which is indicative of the digitalization of the world we live in.

The optimism index was mostly positive, with 68 percent of small business owners saying they are optimistic about the economy. It was up 3, 5, and 8 percent from the previous one, two, and three years respectively.

The success many of the small business owners experienced has been attributed to having an exceptional staff, and conversely the challenges were because finding the right or qualified talent continues to be a problem.

Roe went on to say, “On the flip side, many of the success stories we heard about had to do with having a great team, bringing in more skilled employees and being able to pay them more. Just like they do with bringing on and retaining new clients, a lot of small business owners take pride in the people they’re able to hire and keep with the company.”