Topsy Officially Shuts Down, But Today’s Choices of Social Analytics Are Huge 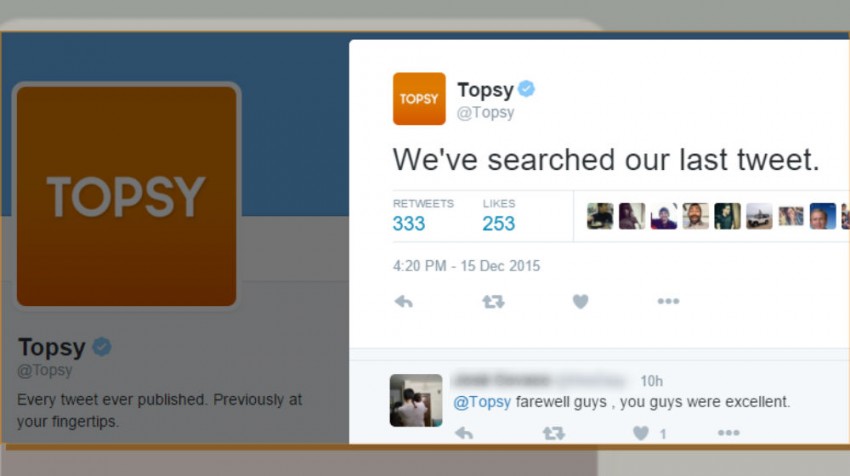 After eight years of providing social analytics and search information, the Topsy team has announced via Twitter that they have officially searched their last tweet.

Topsy appeared to have a bright future when Apple purchased it for more than $200 million two years ago, but the service’s useful life began to fall apart very quickly. In fact, Apple began shuttering the premium accounts in 2014 when they made the decision to stop allowing new people to sign up for Topsy Pro Analytics. Before Apple got involved, Topsy created three notable social search and analytics tools that proved there is a market for this type of research. The SXSW Trendspotter, Twitter Oscars Index and Twitter Political Index were all popular methods of showcasing the power of Topsy’s technology.

Apple’s purchase was confusing to many industry experts because the company was already involved in a partnership with Twitter. Due to this, many began to speculate that Topsy had been acquired to provide Apple with access to engineers or technology to improve some of its own products. For example, some people assumed that Topsy’s technology would be used to improve the iTunes Store. It has also been rumored that the iOS search function benefited from Topsy talent and technology.

It is still unknown if the Topsy acquisition helped Apple in any specific behind-the-scenes way. And now it is possible that Apple will never reveal the reason it paid $200 million for a company only to shut it down a mere two years later. Perhaps the long list of Topsy competitors simply made the company an unwise investment that was too expensive to keep operational. Either way, businesses that have built their marketing strategy around social analytics are not in any danger of losing this edge.   Topsy has plenty of competition out there to meet your social  analytics needs.

Looking for a Topsy replacement? All of these companies offer similar functionality with a few new perks.

Lisa is a Staff Writer for Small Business Trends focusing on marketing technology, productivity and general small business news. She has a background in business and productivity consulting including experience in human resources working for a major retailer before deciding to build her own business.
7 Reactions
Subscribe
Follow @smallbiztrends
RSS LinkedIn Pinterest iTunes