5miles May Challenge Craigslist as the New Online Classified 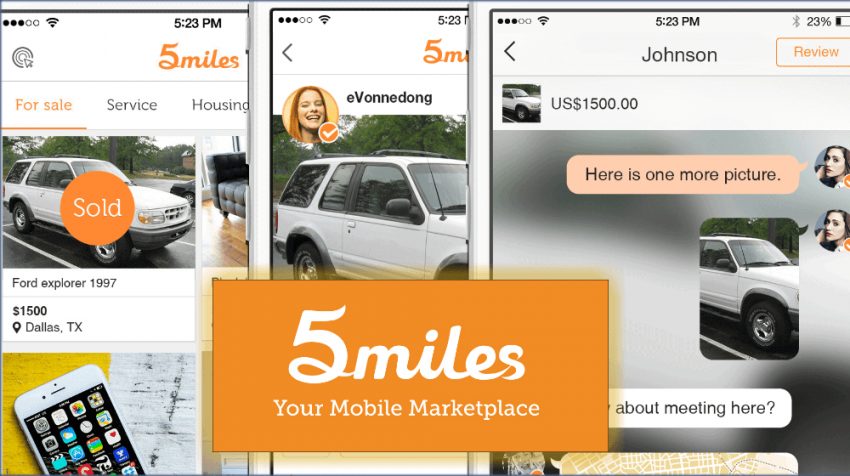 5miles, the Dallas and Beijing-based challenger to Wallapop and Craiglist has secured $30 million in new investment as it celebrates its first year in business this month.

The 1-year-old 5miles mobile marketplace app has managed to attract more than 5 million users (averaging 30,000 downloads a day) and is continuously working towards becoming a major player in the local online classified advertising business that’s been long dominated by Craiglist.

Its list of investors now includes IDG, Morningside, Blue Lake, and SIG-China (part of the Susquehanna Investment Group). In addition, individuals who have worked with or have ties with e-commerce giants like eBay and Alibaba have also invested in the app.

“We can’t imagine a better way of celebrating our first anniversary than with renewed confidence and support from our investors,” 5miles CFO Garwin Chan said in a press release. “We’re proud of the operation we’ve created, and especially grateful for the loyal, growing base of buyers and sellers from all over the country who’ve been able to connect. We are excited to see them successfully transact with one another through our marketplace.”

5miles employs about 45 people in both its Beijing and Dallas offices and was able to use its last round of investment to expand beyond Texas. The company now serves New York, Philadelphia, Boston, Tampa, Los Angeles, Miami and Orlando. The company has also expanded its marketplace services to 12,000 services, and they are also trying to differentiate themselves from other mobile app competitors by allowing small businesses like used car lots to use the platform.

The mobile app essentially updates the concept of classified ads with newer innovations that makes it easy for users to engage with and purchase items. The app uses “Pinterest-style” grid layout to present items across categories like clothes, collectibles, cars, phones, and contracted services like housekeeping, plumbing and babysitting.

Buyers can view items by date of listing, price or distance from the location. They can as well ask questions, bookmark items, make purchase offers and even share and “follow” certain sellers that they like.

Sellers on the other hand can opt to attach voice descriptions other than text to a listed item.

The startup is positioning its app as a safer alternative to Craiglist by using multi-layered verification procedure for new sellers, cross checking people on social media and on email.

The new series of funding brings the total investment in the company to more than $50 million. In its first year, the startup attracted 4 million users and generated $1 billion in gross merchandise volume and in December alone, they facilitated $81 million in local transactions of secondhand goods. These record numbers do not include the startup’s unique offerings of services, job listings and housing.

“We have been following 5miles’ progress since the beginning of 2015, and have been very impressed with the company’s rapid growth and the innovation they have brought to local sellers and buyers,” said Alex Yin, co-founder and general partner at Blue Lake Capital. “We very much look forward to working with the company as they continue to expand.”