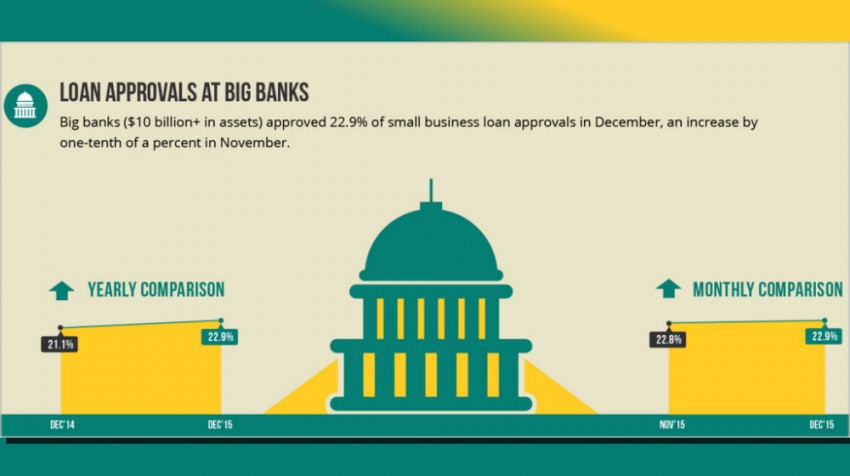 Big banks are now approving twice as many small business loans as they were two years ago.

That’s according to the latest Biz2Credit Small Business Lending Index data for December 2015.

In fact, the small business loan approval rates at big banks and institutional lenders are again at new post-recession highs.

Lending approval rates by institutional lenders, which include family offices, pension funds and bank credit facilities, increased from 62.4 percent in November to 62.5 percent in December.

“We are seeing increasing interest from international funds seeking higher yield investments,” Biz2Credit CEO Rohit Arora said. “Institutional lenders have reduced the risks on these types of investments through digital algorithms that have automated the loan approval process and global investments are becoming more mainstream. With the weakening of emerging markets and strong value of the U.S. dollar, we are anticipating more international funds to enter the small business finance mix.”

Additionally, small business loan approvals by big banks (those with more than $10 billion in assets) improved by one-tenth of a percent to reach 22.9 percent in December.

“The big banks have maintained their aggressive approach to lending to small businesses and with the adoption of the Federal Reserve’s interest rate hike, I expect they will be even hungrier to grant loan requests,” Arora explained. “The adoption of technological advancements on the digital platforms of big banks has streamlined the loan application process and has resulted in lower chances of loans defaulting, thus increasing profitability and a higher volume of loan approvals.”

According to Arora, small banks are approving more small business loans applications under the SBA loan program. The program has significantly reduced the risk they assume as lenders.

Meanwhile, while the economy rebounds, loan approvals at credit unions and alternative lenders continue to slow.

Loan approvals by alternative lenders seem stuck at 60.7 percent, which is the lowest they have ever been since August 2011. The emergence of institutional lenders in the small business lending marketplace has also put a lot of pressure on alternative lenders.

Credit unions continued their steady decline, hitting 42.3 percent in December down from 42.4 percent in November.

Arora says that credit unions are losing market share due to their failure to adequately adapt to technological advancements. “Borrowers seek speed and convenience; many credit unions are lacking in the digital department and this has resulted in their decline in popularity,” he added.