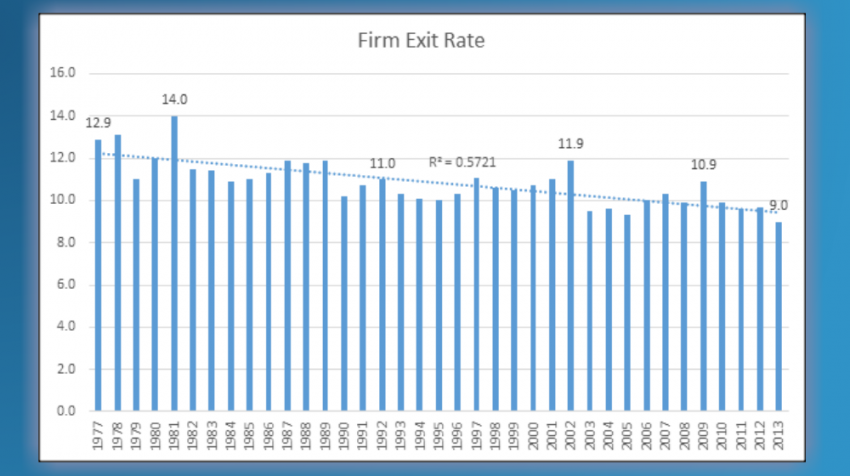 Many observers have become alarmed by the spike in business failure rates that occurred during the Great Recession.

Jim Clifton, the CEO of Gallup, saw the rise in business closures as a signal of a decline in American small business. In a worried post published on his company’s blog a year ago, Mr. Clifton wrote, “When small and medium-sized businesses are dying faster than they’re being born, so is free enterprise. And when free enterprise dies, America dies with it.”

Fortunately, the data from the Census Bureau tells a better story about the survival of American small businesses. Business failure rates and the fraction of American employers that goes under each year is actually in long term decline. In 1977, 12.9 percent of American companies with paid employees went out of business. In 2013, that fraction was down to 9.0 percent.

Of course, that’s to be expected. Businesses are hurt when demand slows and consumers and other businesses aren’t spending. Some can’t weather the downturns and go under. But the spikes in business failures are reversed when the economy recovers.

Contrary to Mr. Clifton’s worry that small and medium-sized businesses are failing in droves, the Census data indicate that small employers are less likely to go under now than in decades past.

Over 99 percent of all American companies with employees are small businesses. So the trends shown in the chart are driven by what happens to small companies. And that pattern is clear.

While recessions cause spikes in business failure rates – the long term tendency is toward more, not fewer, small businesses surviving.