What Can Facebook Custom Audiences Do for Your Marketing Campaign? 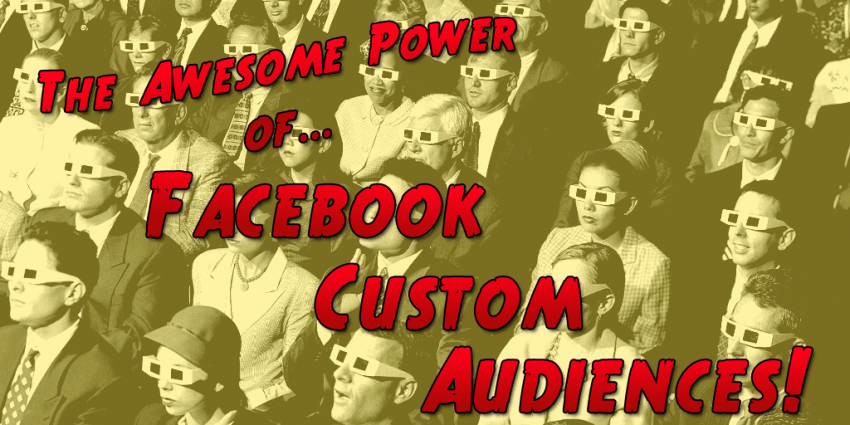 Email marketing is the most-used digital channel on the planet, and for good reason. The vast majority of companies use some form of email marketing.

Your best business comes from people who know you. The people on your email lists are more likely to engage with and buy from you.

Despite all its positives, email marketing presents several challenges.

Even if you’re doing opt-in email marketing that is totally legit and white hat, your emails can still end up in a digital dungeon – think the Promotions tab in Gmail, Microsoft’s Clutter feature, or Unroll.Me.

All of these dungeons cause your email open and click-through rates to suffer.

Another challenge: There’s a supply constraint on email marketing; there’s only a limited amount of inventory. We’ve found that sending more than two email blasts a week causes newsletter unsubscribes to jump by about 2-3 percent.

Meanwhile, a billion people logged into Facebook yesterday, including your target audience, and they’re spending hours every day on this platform. Those are the same people you want to reach!

What follows is one example of how you can unlock the awesome power of a Facebook Custom Audience.

If you ever run into a situation where you want to reach your audience, but email isn’t an option, you can still reach those same people — and actually do it in a smarter, more targeted way using Facebook ads.

Let me share a real-life example with you. I wanted to promote my presence keynoting at PPC Hero Conf in London in October — to help drive registrations and raise awareness about the conference.

I posted about the conference on my Facebook page: 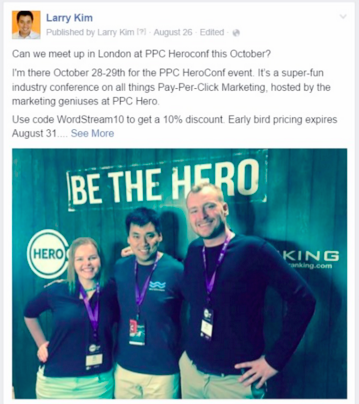 Let’s be real: posting on your Facebook page isn’t really helpful. It won’t result in the types of actions you want because Facebook’s organic reach is terrible.

You can export your emails (from Marketo, HubSpot, or whatever CRM you use) as a CSV file — no need to do any segmentation.

From here you upload the file, which can consist of Facebook user IDs, email addresses, or phone numbers.

Don’t be concerned about privacy. The file you upload gets encrypted when you send it. Facebook uses something called a hash algorithm to see if they can match the data in your file with any of the users with the actual logins on Facebook.

Facebook is able to match when they have your work email (perhaps if you’ve ever done a password recovery) or if they have your phone number (no doubt Facebook has asked for your mobile number for security purposes).

Go for quality, not quantity with your targeting. You don’t want to go after everyone. You want to smartly target your Facebook ad based on:

Rather than blasting an untargeted email to a list of 300,000 names, we’ve found 3,000 needles in our haystack. That’s why our Facebook ad is going to be useful, as opposed to spam.

This Is Insanely Powerful Stuff!

When you do lead capture the segmentation you can do is limited to the amount of data you collect. If your form only asks for first name, last name, and email, you have no idea where that person lives.

So what’s so insanely powerful about Facebook is that you can go back to the future to find demographic information you never collected!

This is heavy. Sorry, email.

And Facebook makes it fairly cheap to go after 3,000 people. It’s difficult to spend tens of thousands of dollars when you’re targeting such a narrow set of people.

In terms of ROI, unfortunately, there isn’t a cost-per-action. It’s hard to track these things all the way through to point of sale, but several people at the conference mentioned seeing the ads, which is how they heard about it, and the conference was very well attended.

A Facebook Custom Audience really opens up marketing use cases that were once more used by email marketers, but now you can do it with advertising.

Even better, there’s no limit on inventory. You run ads and don’t have to worry about unsubscribes. It’s granular, allowing you to do segmentation beyond the fields of data you previously collected.

This is just one clever usage of pay-per-click marketing for event promotion, and is a small sample of the amazing power and potential of a Facebook Custom Audience.