Intel Compute Sticks Transform a TV into a Computer 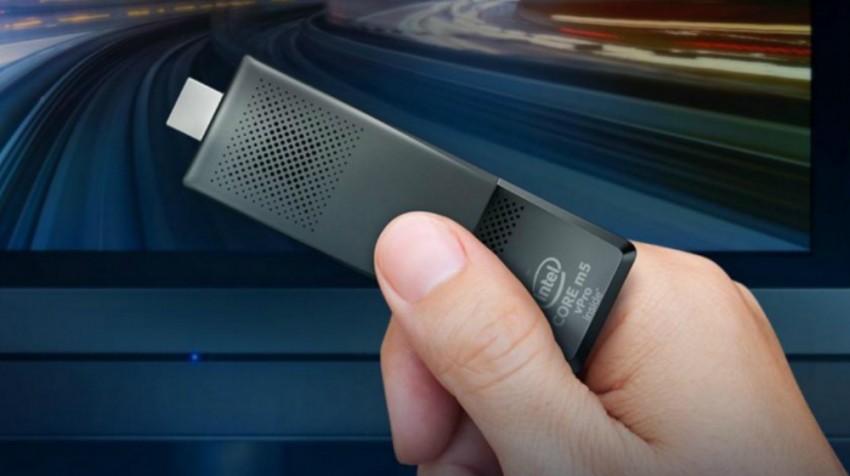 Now it seems that Intel has improved its compute stick with new entrants that solve some of the initial shortcomings.

The Compute Stick is about the size of a pack of gum. According to Intel, it has everything you need to transform a TV into a computer, or a monitor into a complete computer.

At 4.5 inches tall, the Compute Sticks include the Windows 10 operating system, an Intel Atom or Core-M processor, wireless connectivity, the same graphics as a full-size computer, 32 to 64 GB of storage, and more. There’s even a tiny cooling fan, according to Intel.  The exact configuration of what you get depends on the model you choose.

What that means is that when you plug the Compute Stick into an HDMI TV, it turns the television into a fully-functioning computer.  Or you can choose to plug it into a monitor, and turn the monitor into a computer.

Of course, you have to supply a wireless keyboard and mouse.  Or you can use the Intel Remote Keyboard app to control the device with your tablet or phone. But assuming you do that, it turns that display into a full-functioning computer.

When the first Intel compute stick was introduced back in 2015, the general consensus was that it was slow and lacked necessary features, such as sufficient USB ports. Intel seems to have taken that criticism to heart. The latest Compute Sticks offer a faster processor, better networking and more USB ports, according to Engadget.

Priced at under $200, they offer capability in a small package at a modest price.

The two new entrants, along with the original Bay Trail model, bring the Intel Compute Sticks to a total of three offerings.

The new models have been dubbed Cherry Trail and Skylake. These new models each include up to three USB ports, 802.11 WiFi capability for Internet connectivity, built-in Bluetooth 4.2 to connect peripherals wirelessly, 64 GB of storage, and a micro SD card slot. Depending on which model you choose, you can get the Intel Core M5v Pro processor or Intel Core M3 processor.  See the Intel site for exact model configurations.

With Intel getting the formula right, a Compute Stick may be an option for entrepreneurs and small businesses to consider.

Here are four ways small businesses can use a Compute Stick: