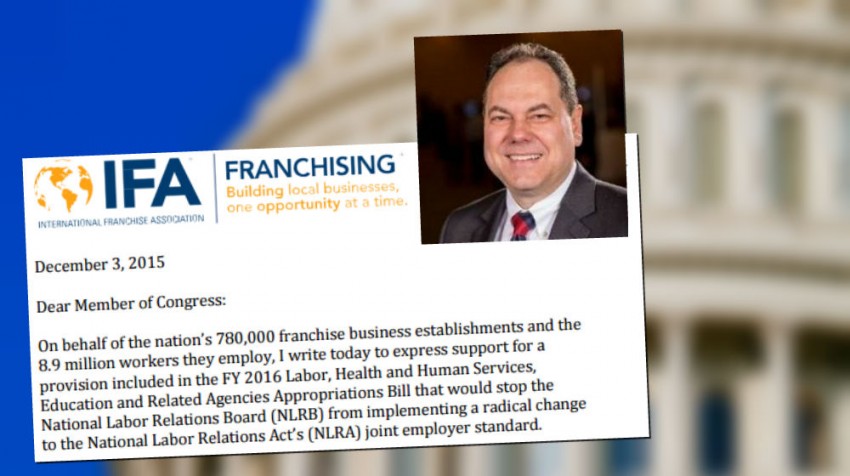 Congress has opted not to delay a ruling by the National Labor Relations Board expanding the “joint employer” standard. The International Franchise Association and other business groups say the new standard will hurt some small businesses including franchise owners.

President and CEO of the IFA Robert C. Cresanti expressed disappointment at the final decision. It was hoped a rider would be added to Congress’s Consolidated Omnibus Appropriations bill delaying implementation of the new NLRB standard.

“We appreciate the support of hundreds of lawmakers in both parties for protecting local businesses from the NLRB’s overreach and are hopeful when Congress returns … they will be awakened to the impact this decision is causing for families in communities across America and be motivated to act,” Cresanti said in a prepared release from the IFA.

In a letter (PDF) to members of Congress, Cresanti laid out the concerns the IFA and other business groups had over the 2015 “joint employer” ruling by the NLRB.

“The previous uncertainty generated by un-renewed tax extenders is dwarfed by the uncertainty caused by the new joint employer definition, which may result in companies being held liable for workers they do not employ,” he wrote.

He added:  “By not restricting the NLRB’s reversal of the decades-old standard, Congress has not remedied the uncertainty facing the nation’s 780,000 franchise business locations and the nearly 9 million workers they employ.”

Ironically, the so-called joint employer ruling had nothing at all to do with franchises or small businesses.

Still, many believe the August 27, 2015 ruling has implications that could be felt widely among small businesses in the future.

The original case involved whether waste hauler Browning-Ferris Industries of California, Inc. could be considered a joint-employer with Leadpoint, the company supplying many of  its contract employees.

In a split 3-2 decision, the labor board decided that it could citing the company’s “indirect control” over the employees in question.

Why is this  important?

The board is suggesting anyone who exerts “indirect control” over a worker’s terms and conditions of employment — even if that worker is an independent contractor — is essentially an employer. In making this decision, the NLRB is departing from previous definitions of what constitutes a “joint employer.”

For franchise owners, the ruling could be particularly problematic. It could mean:

The new joint employer ruling calls into question many assumptions about the nature of employment. And the failure of Congress to act this far means small businesses are stuck in a new an uncertain environment where employee relations are concerned.