"Mass Influence: The Habits of the Highly Influential" analyzes the thought patterns and habits of the most influential leaders and helps individuals harness the power to influence action greater than you thought possible. 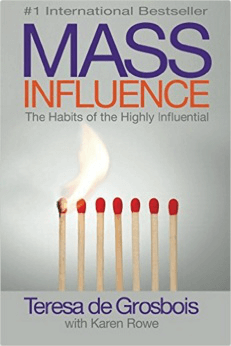 Influence is a powerful tool for businesses, celebrities, and politicians alike. With it, these people can leverage lots of work without having to do a lot of work themselves. Influence, however, is something that everyone wants, but only a few achieve. How do you achieve influence that really counts in a world where everyone can speak their mind?

What “Mass Influence” is About

“Mass Influence: The Habits of the Highly Influential” delves into the mystery of “influence”, that strange thing that moves us to buy a product because it was Oprah mentioned it or pick a stock because Warren Buffet discussed it. Businesses all over the world chase this kind of power, because it pays off dividends in profits, word-of-mouth marketing, and public relations. This is why so many businesses Tweet, Pin, blog, email, make YouTube videos, and Instagram photos. They want to reach that point where their voice makes a difference.

“Mass Influence” is geared more toward a different kind of influence, but the principles are the same, whether you want to make a world-changing invention or sell vacuum cleaners. Influence, defined in the book as “when many know, like, and trust you”, is applicable to every situation or person. Business, just like Oprah, that maintain and grow their influence develop the seeds for their own short and long-term existence.

The chief problem lies in our programming. Our actions at home and work often develop out of limiting internal dialogue. (Example: I must be recognized in the top newspapers, TV stations, etc. before I am considered a success.”) To combat that, “Mass Influence” asks readers to confront and transform their internal thought patterns and to match the thought patterns and habits of influential people, like the Oprah and Bill Gates of the world.

Karen Rowe (@FrontRoweSeat) is an author, writing coach, and ghostwriter who has worked in several collaborations including a reality TV star and retired FBI agent.

What Was Best About “Mass Influence”

The best part of “Mass Influence” was the insight.Teresa de Grosbois and Karen present a powerfully insightful book coupled with down-to-Earth examples that really bring the principles home. The assignments that accompany this book, based on Teresa de Grosbois’ own work, are simple, but really thought-provoking and serve to prod the reader to deeper insights.

For the most part, “Mass Influence” is geared toward the individual, not the small business. Readers won’t find case studies of companies that use the book’s principles to gain more customers. That being said, the principles mentioned in the book seem applicable on an individual and group level.

“Mass Influence” is an exceptionally inspirational book that captures the soul of influence. The book strips the concept of influence away from its rather vague use in social media and back to its roots. Influence, is about connecting with something that is bigger than the individual or business and the book does an excellent job of relaying this message.

For small business owners, the book offers paradigm-shifting for a leader who feels out of sync with their purpose. “Mass Influence” encourages individuals to connect with a larger purpose and use that connection to achieve something incredible. That is an incredible thing to capture within the confines of a book.