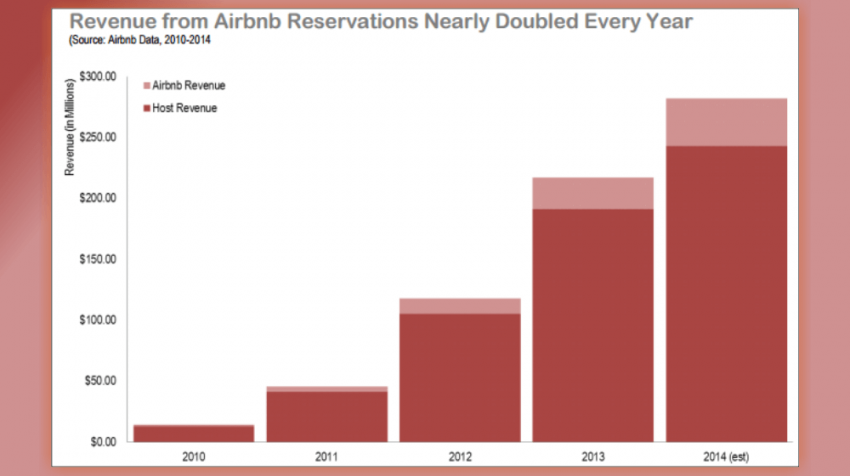 The viability of the so-called “sharing economy” including businesses like Airbnb, Lyft and Uber has been hotly debated.

One central area of contention relates to whether the sharing economy is bringing more wage-earning opportunities to more people, or simply displacing traditionally secure jobs and creating a large populace of part-time, low-paid workers.

This debate continues to play out in communities across the world where the services operate, causing commentators to weigh in with competing claims that vary in tone from alarmism to boosterism.

And now, the research community has joined the fray with deeper analysis of Airbnb operations and the operations of other similar companies.

A new study conducted by researchers at Pennsylvania State University with funding from the hotel industry has highlighted the rise of commercial activity on Airbnb, one of the most trafficked short-term online rental platforms.

The study, named “From Air Mattresses to Unregulated Business: An Analysis of the Other Side of Airbnb,” (PDF) focuses on “hosts” who rent multiple units and the length of time they are renting their units in a sample of 12 major U.S. markets.

According to the study, nearly 30 percent ($378 million) of Airbnb’s revenue in these markets came from “full-time operators,” with rentals available 360 days a year. Each of these operators averaged more than $140,000 in revenue during a 13-month period (September 2014-September 2015).

Moreover, individuals or entities renting out two or more residential properties on Airbnb accounted for 17 percent of hosts in the twelve cities studied. This rapidly growing segment of “multi-unit operators” drove nearly 40 percent of Airbnb’s total revenue for the 12 cities during the period studied, amounting to $500,000.

If accurate, the study, though apparently intent on discrediting Airbnb, has unwittingly succeeded in proving that the rental sharing platform is a viable tool savvy entrepreneurs can use for small business growth.

If you ever had any doubt that the rise of Airbnb is disrupting the hotel industry, much like Uber and Lyft are disrupting the traditional cab industry, this and similar studies (PDF) will make you a believer. And, as you’d expect, old guards in the hotel and hospitality industry are not too pleased about it. They are crying foul.

“The study shows an explosion in activity among multi-unit hosts and the rise of full-time operators in each of the 12 markets we analyzed. Further, operators renting out three or more units represent a disproportionate share of revenue with only 7 percent driving more than $325 million in the period studied,” said Dr. John O’Neill, Professor and Director of the Center for Hospitality Real Estate Strategy at Penn State University, who directed the research.

“Our industry thrives on competition each and every day, operating on a level and legal playing field. And we believe new entrants to the market like Airbnb and the commercial businesses they facilitate have those same obligations,” added Katherine Lugar, President and Chief Executive Officer of the American Hotel & Lodging Association, which funded the Penn State study.

“Unfortunately, this report shows a troubling trend as a growing number of residential properties are being rented out on a full-time, commercial basis, in what amounts to an illegal hotel, and using Airbnb as a platform for dodging taxes, skirting the law and flouting health and safety standards,” Lugar added.

“This is not about ‘home sharing,’ a practice that has existed for decades as a way for individuals to make a little extra cash by renting out the occasional room or home,” she insisted. “But, this data tells a very different story than the one told by Airbnb, who wants the face of Main Street, but the wallet of Wall Street.”

“As a corporation valued at more than $25 billion,” continued Lugar, “they have a responsibility to protect their guests and communities; they should not be enabling the corporate landlords who are clearly using their platform to run illegal hotels.”

But, Airbnb Disapproves of the Study and Its Claims

According to Airbnb the study was intended to “mislead and manipulate.”

“This study shows that the hotel industry gets what it pays for, which in this case is a specious study intended to mislead and manipulate,” Nick Papas, an Airbnb spokesman, said in an email.

“Airbnb is succeeding for the very simple reason that our hosts — the vast majority of whom are middle class people sharing their homes in order to create supplemental income — provide guests authentic, transformative experiences.”

As far as Airbnb is concerned, its service is “for the people, by the people, of the people.” It provides a way for ordinary homeowners and renters to earn some extra cash from their homes and  apartments. And in a recovering economy this may not be such a bad thing.

In a data analysis report the rental-sharing company released about its business in New York City, less than 2 percent of hosts in the city operated three or more units, the New York Times reports. Those landlords accounted for 24 percent of revenue. These figures contrast sharply with the data released by the Penn State researchers.

Airbnb has in the past had to fend off criticism by regulators in different cities across the world with its own studies highlighting the benefits of short-term stays on local housing markets, arguing that the company’s service benefits local economies (PDF).