Did A Single Tweet Get Trump Quote Removed from Bottle Cap? 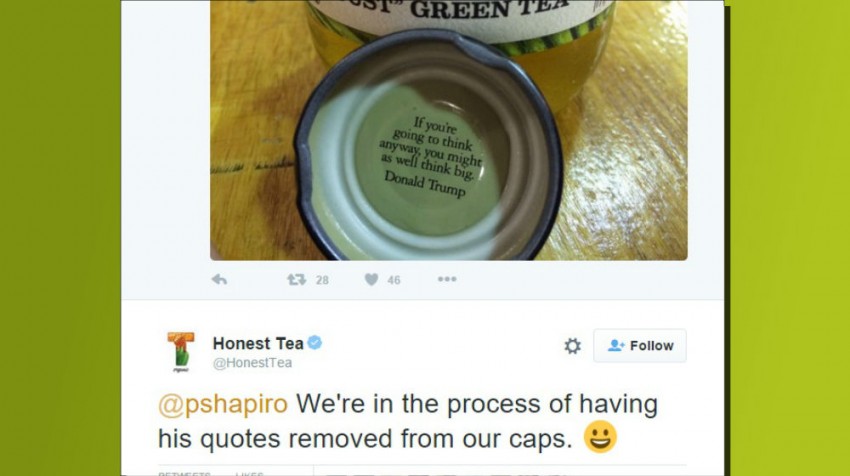 Honest Tea’s practice of including thought-provoking quotes and sayings at the bottom of the company’s bottle caps started in 1999. And it has, since then, received overwhelming positive response from customers.

However, one particular quote from billionaire and current Republican presidential hopeful Donald Trump has gathered substantial controversy on social media.

The quote reads, “If you’re going to think anyway, you might as well think big.”

@pshapiro We’re in the process of having his quotes removed from our caps. ?

Shapiro, who’s account identifies him as a vice president of farm animal protection at the Humane Society of the U.S. and an “animal advocate,” isn’t specific about why he objects to the quote.

However, he later told the Associated Press: “I usually don’t think of organic green tea consumers as target demographic for Donald Trump.”

While some Honest Tea followers on Twitter seemed to agree with the sentiment, others clearly did not:

@SwampBabe813 Sorry to hear that. We started refreshing all of our cap quotes several months ago. Here’s the story: https://t.co/M8W4YDt8Gx.

In a post on the official Honest Tea blog, company co-founder Seth Goldman tried to downplay the impact of a single tweet on the company’s decision to have the Trump quote removed, explaining:

“We generally refresh these quotes every 12-18 months to share fresh ideas. We have already sent the newest wave of 100+ quotes off to the printers – my two favorites of the next printing run are ‘No one has ever become poor by giving.’ – Anne Frank and ‘A winner is a dreamer who never gives up.’ – Nelson Mandela. Mr. Trump’s quote, which was not political in nature, was removed because it had run its course, along with other great quotes like ‘Nature provides a free lunch, but only if we control our appetites’ – William Ruckelshaus.”

The only discrepancy here is that, as Grub Street recently reported, the Trump quote has been in circulation since July 2013. That’s well over the 12-18 months Goldman claims the company usually uses a quote.

The company paradoxically seemed to give weight to the argument that it had been swayed by a single customer comment. The official Honest Tea Twitter account remarked to Shapiro:

@pshapiro Since your tweet started all of this (?), we thought you’d enjoy this blog by our TeaEO Emeritus: https://t.co/M8W4YDt8Gx.

“There is nothing objectionable to the thinking in Mr. Trump’s quote ‘If you’re going to think anyway, you might as well think big.’ Indeed, it’s certainly the mindset that we’ve brought to our business and our impact.

Honest Tea is a tea for all parties — we welcome anyone who wants to drink our organic iced teas because we know that when people choose organic and Fair Trade tea they are making an impact, regardless of their party affiliation.”

Businesses must always be careful when straying into politics or other controversial issues unless their brand is based on a certain political or ethical stance.

It could be argued that drinkers of Honest Tea’s organic Fair Trade beverages might not tend to be Trump supporters. But angry tweets about the company’s decision suggest otherwise.

It remains to be seen whether the company’s decision to remove the quote will hurt its brand, enhance it or have no impact at all.

Lisa is a Staff Writer for Small Business Trends focusing on marketing technology, productivity and general small business news. She has a background in business and productivity consulting including experience in human resources working for a major retailer before deciding to build her own business.
5 Reactions
Subscribe
Follow @smallbiztrends
RSS LinkedIn Pinterest iTunes