“The Power of Broke” Speaks to Entrepreneurs with “Insufficient Funds”

"The Power of Broke: How Empty Pockets, A Tight Budget, and a Hunger for Success Can Become Your Greatest Competitive Advantage" is an inspirational guide to the entrepreneur who suffers from the "lack of resources" label. Through this book, readers learn the lessons gained from a guy who built a fashion label out of home-sewn clothes and other everyday people who transformed their lack of resources into a powerful competitive advantage. 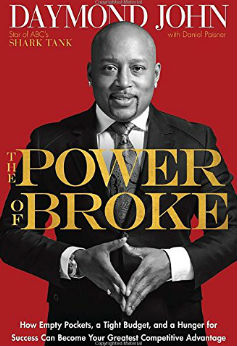 Lack of capital is the most dangerous obstacle to a business, no matter what stage of growth you are in. No stranger to the “lack of funds” label, himself, “Shark Tank” investor and the fashion mogul who created a powerhouse from scratch, Daymond John shares the key concepts that helped him (and plenty of others) turn that label into a decisive competitive advantage for bootstrapping entrepreneurs.

What “The Power of Broke” is About

Like other books for bootstrapping entrepreneurs, Daymond John’s book offers hope and encouragement. John points to many stories of “everyday people,” most notably a woman who launched a million-dollar cupcake business when she only had $33 in her checking account, of people who capitalized on opportunity, despite their lack of funds.

The difference in Daymond John’s book is the marriage of business sense to this inspirational message. Instead of crafting elaborate business plans or searching for that one-in-a-million investor, “The Power of Broke: How Empty Pockets, A Tight Budget, and a Hunger for Success Can Become Your Greatest Competitive Advantage” focuses on proof of concept, “in the field” market research, and leveraging past skills and experience as the keys to success. As Daymond John points out, not every entrepreneur, even with the best ideas, has access to traditional means of startup capital like loans and investors. This has often been seen as a disadvantage.

John points to the irony that even well-financed businesses are drained of capital because they fail to get new customers. That is the leveling field between all businesses. Whether your business has millions or a dollar in assets, every business needs new customers.

In the search for the next customer, businesses can become complacent (“We’ve got that market”) or overtly negative (“We can’t enter that market”). This is less of a problem for the money-strapped entrepreneur with a product that has been “market-tested” in the real world. To Daymond John, that is where the potential lies. Using that potential is what helped Daymond John develop the now-famous FUBU brand, which he then leveraged to higher levels of success.

In addition, the organic growth that comes with bootstrapping, John says, is also a competitive advantage. As John points out, companies flush with money often over-invest in marketing activities that lack the tenacity, creativity and straightforward persistence of the bootstrapping business.

Daymond John (@TheSharkDaymond) is a fashion mogul, entrepreneur, author, investor and motivational speaker. John developed his entrepreneurial spirit while working full-time and going to high school. He later managed a commuter van service then developed an iconic fashion label out of home-sewn clothes.

Daniel Paisner is a writer who has worked with many celebrities and stars.

What Was Best About “The Power of Broke”

The best part about “The Power of Broke” is two-fold: the positive (but realistic) message for bootstrappers and the use of truly “everyday people.” Daymond John speaks in the language of “everyday people”, not the expected business jargon. This helps John spread the message to his intended audience, “everyday people” with budding entrepreneurial aspirations.

The stories in “The Power of Broke” go more in-depth than most “rise from the bootstraps” stories. As an example, readers encounter the depressing story of Kevin Plank when he didn’t even have the $2 to pay the toll on his way home.

The only slight criticism that could be made about “The Power of Broke” is the lack of strategic plan that helps readers reach their business goals. John draws out several important principles called “Shark Points” at the end of each chapter and “Broke Power Principles” in the back of the book.

Why Read “The Power of Broke”

This book is best designed for the audience who watches the author on “Shark Tank.” Daymond John speaks in the language, home-grown stories and vision of that group.

Overall, “The Power of Broke” gives inspiration in two ways: 1.) It provides a realistic option for entrepreneurs who feel they lack resources, and 2.) It transforms the idea of “lack of means” into a competitive strength, giving readers the initiative to press forward. Comment ▼