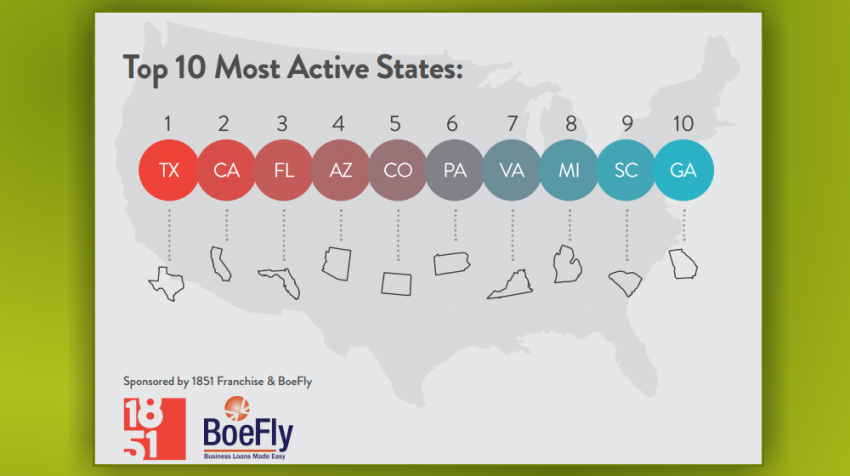 Deciding on a franchise to purchase can be a difficult task, but securing franchise financing to get your startup off the ground and growing — that can be harder.

Franchise lending came to a grinding halt during the global economic crisis of 2008, but since that time there has been a gradual upturn in franchise financing.

The latest evidence of this comes from the online lending website BoeFly that released a new Franchise Lending Index in partnership with 1851 Franchise, showing an increase in franchise opportunities during the month of January 2016.

If you’re wondering where most franchisees are getting financing, BoFly and 1851 Franchise’s January 2016 Franchise Finance Index may provide the financing information you need.

BoeFly has been educating future business owners on the process of financing a franchise since 2009, and offers a Fundability App to find out how fundable you are. Meanwhile, 1851 Franchise runs an online franchising community and works with more than 50 franchise brands around the U.S. The two organizations introduced the new monthly Franchise Finance Index to “leverage transparency and make successful franchising easier,” according to Nick Powills, Chief Brand Strategist and publisher for 1851 Franchise.

“This partnership between 1851 Franchise and BoeFly has resulted in this incredibly useful data, and for the first time, it’ll all be visible to the public,” Powills said in a press release.

“By exposing these numbers,” he continued, “we’re helping franchisors better identify the right candidates, and conversely, we’re giving candidates the information they need to determine if they’re ready to take the next step into franchise ownership. In the end, it could lead to faster openings for new business owners, while allowing the franchisor to eliminate financially unqualified candidates sooner, freeing up time to work with more qualified prospects.”

The report reveals the average FICO score crrently is 748.15 while the average SBSS score is 191.38. The index also shows that Texas, California, Florida, Arizona, Colorado, Pennsylvania, Virginia, Michigan, South Carolina and Georgia are the most active states for franchise leads today.

Sources of frachise financing include the International Franchise Association (IFA) and its affiliated programs like Vet Fran for military veterans, the U.S. Small Business Administration (SBA), which provides loans that are partially guaranteed by the government, and conventional lending institutions like banks and credit unions.

Almost all U.S. franchisors also provide debt financing. While some provide a fraction of the financing you need for your business, others carry the entire loan through their own financing companies. Not surprisingly, therefore, the first place small business owners and aspiring franchisees traditionally turn to for franchise financing information is the franchisor they are interested in.