Should you Pitch First or Last at Demo Day? 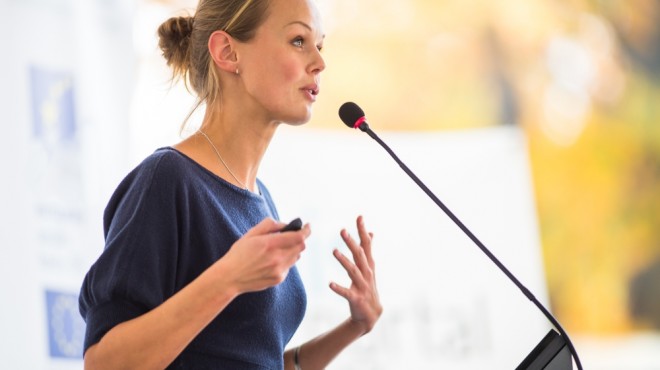 Consider this scenario: Demo day at your accelerator is coming up soon and the organizers have asked you and the other start-ups in your cohort to sign up for a time to deliver your pitch to investors. Should you pick the first slot, the last slot, or a time in the middle?

The technical guys on your team all tell you it doesn’t matter. What you say matters more than when you pitch, they argue. But you remember enough of your behavioral economics and marketing classes from college to know that investors won’t react to the early pitches the same way as the later ones. You just can’t figure out the direction of the effect.

Demo Day Pitch: First, Last or Somewhere in the Middle?

Investors will be more favorably disposed in the beginning, they say. The financiers won’t be tired (or bored) from watching multiple pitches, and they won’t have been away from their emails and texts for very long. Most importantly, the investors won’t have seen other businesses that will be competing with yours for their attention.

Financiers, they argue, have to calibrate their evaluation of the pitches. Going into the session, many in the audience will be expecting to see pitches from the next Airbnb, Uber, Facebook or Dropbox. But the average pitch from your demo day cohort isn’t likely to be that good. So they are going to be disappointed.

That means that, initially, the investors’ reaction going to be negative. Their disappointment will make them critical. But, as they see more ventures, they will recalibrate their expectations. They will begin to judge the ventures less harshly, comparing them to each other, not an idealized standard.

There Isn’t a Lot of Research to Guide Your Decision

Few researchers have explored the effect of pitch order on performance at presenting to investors in these kinds of situations. But recently a Case Western Reserve University colleague and I ran an experiment that sheds light on this question. We randomly assigned the order in which presenters delivered 90 second elevator pitches to panels of three-to-four accredited-investor judges in four elevator pitch competitions in Northeast Ohio in the fall of 2015.

The judges were asked to evaluate the pitches on a one-to-seven scale that represented the degree to which they would “would pursue a follow up meeting to learn more about the venture” – the entrepreneur’s main goal in delivering elevator pitch. The entrepreneurs were competing for a $2,500 first prize and the investors were asked to treat the elevator pitches in the competition the same way they would treat elevator pitches they saw elsewhere. So the scenario is reasonably realistic. 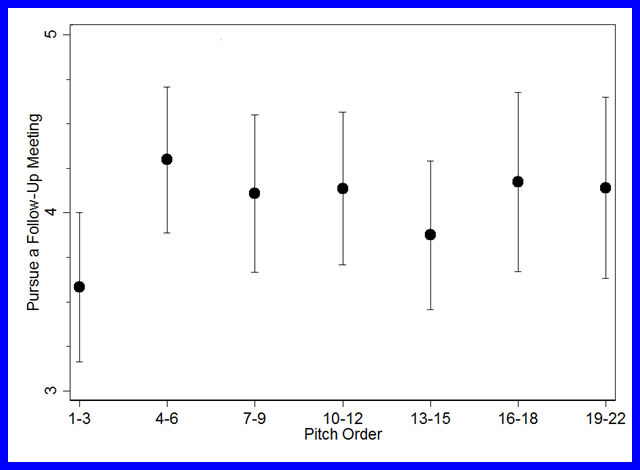 The results are shown in the image above. While the order in which people pitched was completely random, the average score of entrepreneurs who pitched first, second or third was considerably lower than that of entrepreneurs who pitched the panels later. That is, the judges were less likely to agree to pursue a follow-up meeting with the first three presenters than with the later presenters.

The twitter length message of the study for entrepreneurs is simple: Don’t sign up for early slots in elevator pitch competitions; your chances with investors are greater if you pitch later.