Etsy Opens its First Physical Store in Macy’s in NYC 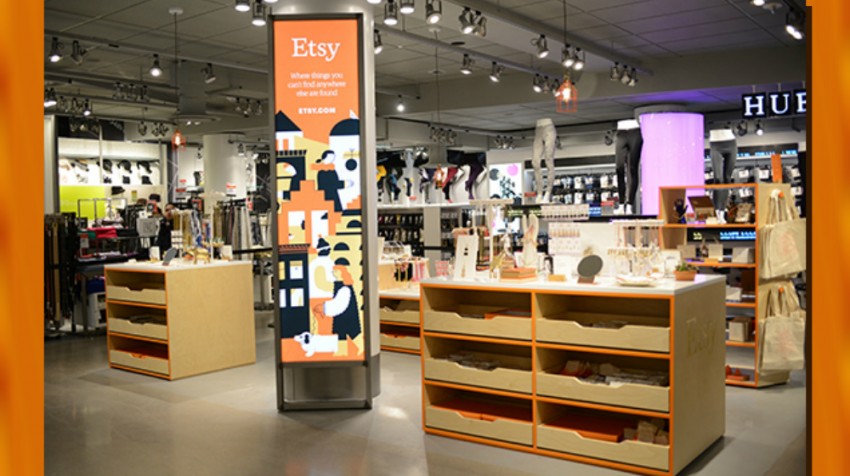 The Macy’s in New York City’s Herald Square just got a new tenant as Etsy announced its plans to open an Etsy store (a pop-up shop) inside the retail store.

The Etsy store in New York City will be currently featuring somewhere over 50 products which would include household items, jewelry and stationery. The products will be displayed on a theme schedule which will change every two months.

This will allow customers to stay updated and engaged. The first theme in this row is ‘New York’ and includes sellers like Debbie Aimee and Sara Schiwal of Hook & Matter and other New York sellers. The Etsy pop-up store is located in the lower level of Macy’s and is part of a new section called ‘One Below’ which specifically caters to the millennial crowd.

Although this is Etsy’s largest retail partnership to-date, it has previously collaborated with big names like West Elm, Nordstrom, Lou and Gray and Whole Foods. The designers have left no stone un-turned to make sure that the store looks captivating and relevant at the same time, according to Dana Mauriello, director of seller category growth at Etsy.

By allowing Etsy inside its store, Macy’s can now give its shoppers an opportunity to see online retailed goods in person. Since this is Etsy’s maiden venture in this direction, this might turn out to be a major attraction for its fans too. On the other hand, this also gives Etsy a chance to interact with its patrons face to face.

This recent announced has seen a rise in investor confidence as Etsy shares beefed up 6 percent earlier this week. Shareholders are now keen to see if Etsy’s marketing plans are able to turn the company’s fortunes.

Despite the losses, Justin Weil, a managing partner with Kalex Advisors claims that the Company has had a relatively healthy profile with only about $10 million in debt as of September 2015 against a cash reserve of $287 million.

The latter hence gives it sufficient room to come on top of its marketing and other plans. The 10-year old Brooklyn based company has a strong portfolio of nearly 1.5 million active sellers and around 23 million active buyers. It recorded $2 billion in transactions at their online marketplace in 2014. This data was shared by their CFO, Kritisna Salen at the December 2015 industry conference.

At the event, she further highlighted that Etsy Manufacturing, which aims to help manufacturers of handmade products; and has been underway for quite some time now is soon expected to see the light of the day.

Whether this venture by Etsy proves to be profitable or not is a question that will still need to be answered. However, the optimism around it should definitely help the company which is slated to report its fourth-quarter 2015 earnings on February 23.