Google Will Discontinue Flash Ads in 2017 (So Update Your Displays) 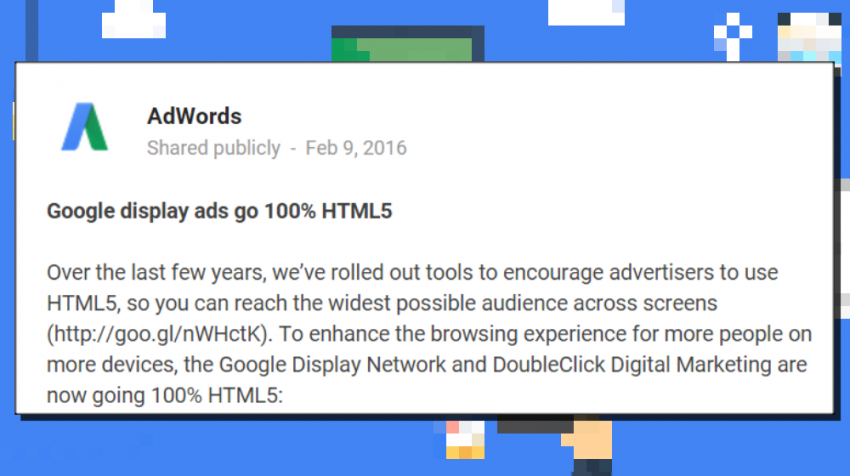 Poor Adobe Flash Player. Everyone seems out to get it — and now that includes Google.

Google is moving toward the use of HTML5 in the ads displayed on its ad network. Starting June 30, 2016, display ads built in Flash can no longer be uploaded into AdWords and DoubleClick Digital Marketing.

Starting January 2, 2017, display ads in the Flash format can no longer run on the Google Display Network or through DoubleClick. Video ads built in Flash will not be impacted at this time.

Adobe Flash Player has had a slow demise. Complaints about security, openness and battery usage on cell phones have floated around for years. In November 2011 Adobe signaled the approach of the end when it cancelled Flash Player for mobile devices and shifted engineering staff to Web standards like HTML5. Flash Player Pro has been renamed Animate and has been expanding its abilities to produce HTML content instead of Flash content.

Other well-known platforms that either don’t use Flash or are phasing it out:

Apparently the ubiquitousness of Flash has made it a target of “exploit kits,” packets of code sold to aid hackers in placement of malware or ransomware. Fixing those weaknesses have been a problem.

Google is providing some help in making the transition to the new format. But don’t procrastinate too long.

To update your Flash ads to HTML5 in AdWords, you have two basic options.

Youh can upload your own HTML5 ads or use Google Tools including Google Web Designer to build HTML5 Ads of your own.