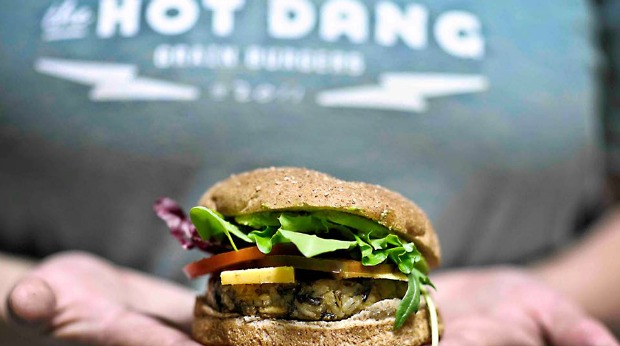 Some of the best inventions were created by accident. And that was also the case for Martha Pincoffs when she created Hot Dang and its now somewhat famous meatless veggie grain burger.

Pincoffs never intended to start a business or to invent a new type of food. She was actually just taking part in an experiment. For a year, Pincoffs and her partner started a challenge where they only made food from locally sourced ingredients.

And one night, when she didn’t feel like heading out to the farmer’s market yet again, Pincoffs threw together some rice, barley, beans and other random ingredients she had lying around and made a meatless veggie burger patty.

When she shared the meatless veggie grain burger with friends, they raved about it. With their constant encouragement, Pincoffs decided to start selling them at local farmer’s markets. And shortly after, she was approached by someone from Whole Foods. So she started selling the burgers there and in other markets and restaurants as well.

Since Hot Dang was founded back in 2011, the company has grown tremendously. The grain burgers are sold in Whole Foods stores, Hat Creek Burger Company restaurants in Texas, and several other markets, stores and restaurant chains. Pincoffs even enlisted the help of family friend Tim Murphy, a food industry veteran who now serves as the company’s CEO.

Now, the company is even expanding into the breakfast market with a line of Breakfast Toasters. Murphy described them as similar to Pop-Tarts, since they can be heated up in the toaster. But they’re made with things like oats, seeds, nuts and berries.

Pincoffs’ innovation in the kitchen certainly has been a big part of Hot Dang’s success to this point. But another factor could be the growing popularity of healthy food options. Murphy even suggested that this trend is giving small businesses a greater opportunity in the food industry than they’ve seen in the past.

He said in a phone interview with Small Business Trends, “It’s amazing to see how these small little guys are disrupting an industry. You have less people eating foods from big companies like General Mills and Kraft and more people supporting these cool smaller brands.”

But with that growing segment of the industry, Hot Dang has to work even harder to stand out. One way that Murphy says makes Hot Dang different is the company’s attitude. Rather than focusing on what is not in the food, just like all the meat-free, dairy-free, gluten-free, egg-free, flavor-free options out there, Hot Dang focuses more on taste and fun.

“It all comes down to the name, Hot Dang. The idea behind it is like, ‘Hot Dang! This is a healthy food that actually tastes good.’ It’s that element of surprise. And it shows that we’re having fun with it,” says Murphy.

Part of that fun also lies in the company’s marketing efforts. Hot Dang puts a lot of emphasis on its blog and Instagram account, which showcase different ways to use the Hot Dang grain patties, aside from just throwing them on a bun with some ketchup and mustard.

Instead, Murphy says you can use them as the base for plenty of different dishes. You can create a salad around them, top them with eggs, add them to your pasta or use them basically any other way you can think of. The company loves encouraging that kind of creativity among its customers, especially since that’s the type of thinking that led to the company’s founding in the first place.