Income Inequality: What Everyone Needs to Know

It’s election year again and each party will be looking to gain your vote by hook or by crook. Likely you will be bombarded with statistics, promises and policies, and one subject which is bound to be debated is the decline of the middle class and inequality. By reading “Inequality” you will gain a true understanding of inequality in today’s society, and be better positioned to make a more informed decision as where best to cast your vote. 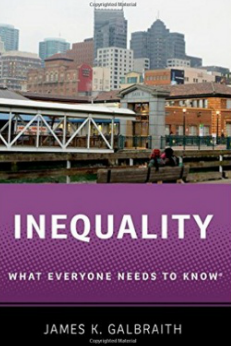 With it being election year in the U.S., I thought I would take the opportunity to review a book on a subject which is bound to be an issue and talking point in the coming elections. But the topic also has implications for income inequality, small business and the policies used to address inequality in society.

The word “inequality” means different things to different people, and in “Inequality: What Everyone Needs to Know” James K. Galbraith provides a detailed study of the concept of inequality and the variety of methods used to measure it. The book also follows debates about inequality. And it looks at the possible causes and steps that can be taken to impact it.

What “Inequality” is About

Often, when the topic of inequality is being discussed, many people immediately think about inequality in the workplace due to race or gender, and perhaps this can be partly attributed to Thomas Jefferson’s quote that “All men are created equal”.

In his book “Inequality” the author outlines the meaning of the word when applied to economics, the types of inequality that exist, the cause and effect of inequality, and how inequality can be measured. And while inequality due to race and gender are briefly covered in his book, it is the inequality of pay, income and wealth that is the main focus of the book.

The author looks back in time to when inequality was far worse than it currently is today and addresses how notable economists have, over the centuries, devised various formulas and models to calculate inequality. Due to economics not being an exact science, it is unsurprising that the results varied greatly depending on the formula and data used. Furthermore the true and accurate data does not appear to be widely available in many countries.

When looking at inequality today and the methods being used to reduce it in the 21st century, the author mentions:

“… regulation, including direct regulation of wages, prices and interest rates. In part by taxation. In part by providing public infrastructure and consumption goods, in which we all share. And in part by social assurance, which assures a minimum income to those displaced by economic change or sidelined by age or illness. Again, whether all these forces and institutions are well run and necessary is a matter of unending dispute.”

He further goes on to address the issues of unionization, migration and immigration, free trade, education, technology and a variety of other issues which play a part in the inequality in our society today.

James K. Galbraith (@J_K_Galbraith) has written several books and penned many an article on inequality. Galbraith is a father of four and currently teaches at the University of Texas in Austin. He has degrees from both Yale and Harvard. When pay and income inequalities became a major concern in the early 1980s, Galbraith served as the Executive Director of the Joint Economic Committee of U.S. Congress. In 2014, he was the co-winner of the Global Development And Environment Institute’s Leontief Prize for Advancing the Frontiers of Economic Thought.

What Was Best About “Inequality”

There is a lot to digest in “Inequality” on the subject of inequality. Having a basic knowledge about the subject of economics will undoubtedly help, however the author has tried as much as possible to use laymen’s terms to make the subject easier to digest.

I particularly enjoyed the short section where the author discusses whether wealth translates to power. For me, this highlights the question of whether democracy necessarily translates to a lesser degree of inequality in society. As the author states earlier in the book:

“It takes a long time (if ever) for a newly established democratic government to begin to reduce inequalities incurred under a previous regime, as elected governments in South Africa, Brazil, Chile and elsewhere have discovered.”

It is obvious that the author’s main intention is to enlighten the reader as to the true meaning of inequality, the numerous ways to calculate it, and its effects around the world over the years.

For me, what was missing from the book however, was what the author himself believes should be done to address inequality. In chapter 10 “Policies Against Inequalities” the author states:

“… although this author holds a definite view, it has not been a goal of this book to argue either side of the case.”

I found this a rather disappointing position for the author to take.  After all, whom better to offer a balanced opinion than an expert on the subject.

Income Inequality, Small Business and the Reasons for Reading

If like me you are interested in the subject of economics, then you too should find this an enlightening and interesting read. If not, as a voter and business owner, the economic policies of government have a huge impact on the running of your business.

A book such as “Inequality” should help you to better understand the impact of the economic policies put forward by various political parties.  They are policies that can also have a powerful effect on your business.

John Blunden is a Book Reviewer for Small Business Trends. He is a British writer now living in South Africa where he successfully owned and ran a variety of businesses for several years before deciding to take up his passion for writing.
One Reaction
Subscribe
Follow @smallbiztrends
RSS LinkedIn Pinterest iTunes