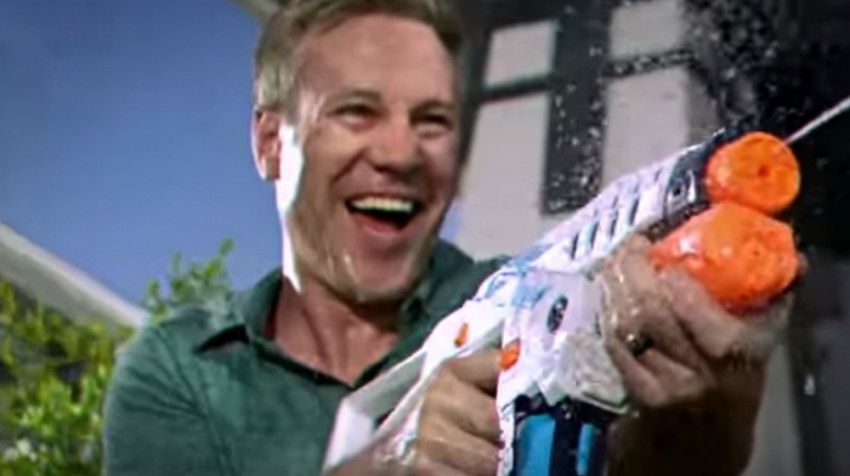 During the 1990s, before kids were playing Need for Speed and Call of Duty on their Playstations, there was the Super Soaker water gun.

Super Soaker was a particularly epic invention for children everywhere that rendered traditional pistol water guns that piddled out a thin stream of water obsolete, has just earned it a place in the Toy Hall of Fame.

Its creator, Lonnie Johnson, an African-American scientist and entrepreneur with a uniquely excellent knowledge of fluid dynamics, invented the trademark pressure pump that allowed Super Soakers to spray water dozens of feet at never-before-seen volumes.

However, initially  Johnson had to fight a much bigger company in court to receive the money owed for his invention. Legal disputes between the giant toy maker Hasbro Inc. and Johnson’s company, Johnson Research and Development Co.,  at first kept him from being properly compensated.

In a breach of contract lawsuit filed in the U.S. District Court in Atlanta in February 2013, Johnson accused the multinational toy and board game company Hasbro of violating a 1996 agreement to pay him Super Soaker royalties of two percent for “three-dimensional products” based on the appearance of the toy, and one percent for “two-dimensional visual representations.”

The suit claimed Hasbro sold water guns that were “visually similar and based upon the appearance of Super Soaker water guns that incorporate Johnson’s technology” without paying him.

Johnson also wanted the court to force Hasbro, which has manufactured everything from Monopoly to Mr. Potato Head, to open its books to determine sales of Super Soaker products from 2006 to 2012.

Toward the end of 2013 the dispute was resolved when Johnson finally received a settlement, highlighting the value of licencing and filing for patent protection for your best products or service ideas.

Hasbro Inc. awarded nearly $73 million in royalties to Johnson’s Atlanta-based company back then.

“In the arbitration we got everything we asked for,” Johnson’s attorney, Leigh Baier told the Atlanta Journal-Constitution at the time. “The arbitrator ruled totally in Lonnie’s favor.” The attorney also reported Johnson was “very pleased” with the outcome.

Johnson, a nuclear engineer, Tuskegee University Ph.D. and former NASA scientist, founded his company in 1989. That same year he licensed the Super Soaker to Larami Corp., which was later purchased by Hasbro.

Larami’s aggressive advertising sold 27 million Super Soakers at $10 each in the first three years of production.

In the years that followed, innovations such as lengthening the distance of the water stream, increasing water carrying capacity and altering water direction, increased the toy’s popularity.

Larami Corporation and then Hasbro have since sold over 200 million Super Soakers in more than 175 variations, generating about $1 billion in sales for the companies.

Johnson, a native of Alabama, moved to Atlanta in 1990 before his Super Soaker invention became a household name. Though known for his famous water weapon, his passion has more recently turned to batteries,

Much of the money from his invention has been reinvested into his business which now researches revolutionary rechargeable batteries and thermodynamic technology that turns heat into electricity.

Johnson’s story is an important one for small business owners and entrepreneurs. It reminds those who make a business from their ideas of the need to be vigilant.

But it may also be a reminder of the importance of reinvesting in your business as you prepare for your next endeavor.