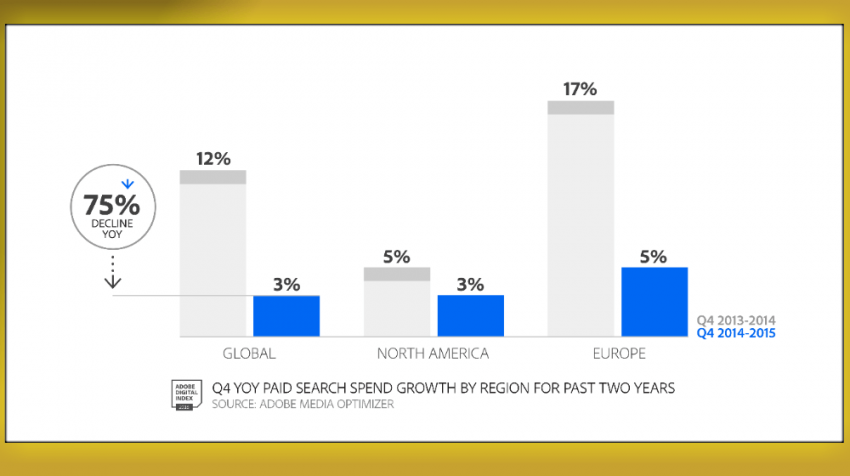 Among other things, the report notes global growth of paid search is down 75 percent year-over-year, “which can be partially attributed to advertisers’ new willingness to spend on mobile search.”

Significantly, the largest declines have been reported in Europe where growth rate declined to five percent from 17 percent reported in the same period last year.

The study notes mobile spend is now 37 percent of all SEM spend (up 23 percent year-over-year) — indicating advertisers’ growing shift towards mobile paid search. What’s also worth noting is that mobile browsing now accounts for 41 percent of all site visits — justifying why advertisers are more interested in mobile.

Becky Tasker, managing analyst at ADI says, “The percentages are really close, which indicates to me that advertisers are becoming more aware of what consumers are doing, and they’re trying to align their marketing efforts accordingly.”

Smartphones are driving the mobile growth (up 51 percent in Q4 year-over-year), while the tablet share has continued to shrink (down nine percent over the same period.) Advertisers are also seeing more Web traffic thanks to their mobile SEM efforts, with clicks up 35 percent.

Apart from high content consumption levels, what works in favor of mobile is that the cost per click is less than the desktop cost per click.

In display advertising, a key highlight is that Google is beginning to close the display gap with Facebook. Notably Facebook’s CTRs for display ads are growing 36 percent year-over-year, thanks to some changes introduced by the company. Google’s CTRs are also seeing a significant increase (27 percent).

Tasker attributes contextual placement for display, auto conversion of text to image ads, and audience insights to this CTR growth.

Over the holidays, the study reveals nearly $1 out of every $3 in revenue came from search and display advertising, with email and display increasing their share of sale with 15 percent and 2.5 percent, respectively.