Checklist for Negotiating a Business Deal 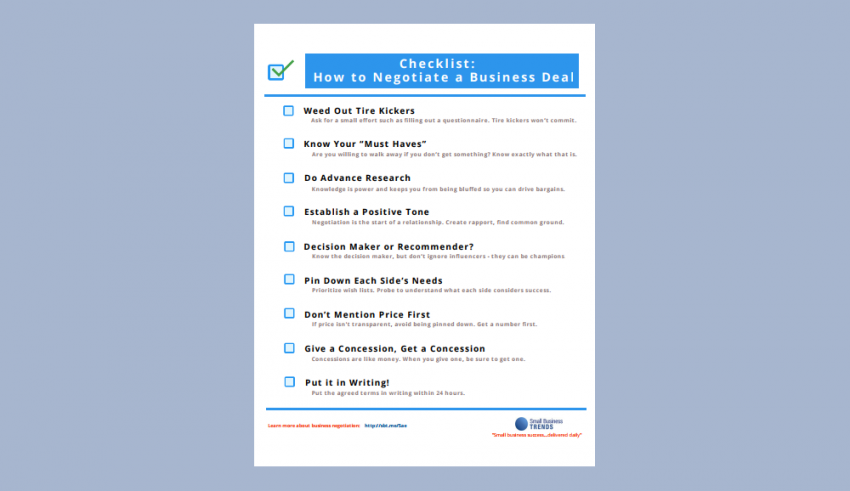 Over the years I spent in the corporate world, I was fortunate enough to attend several different negotiation seminars and courses.

Each had its own nomenclature and structure. Some negotiating courses were better for negotiating huge multimillion dollar acquisitions and divestitures. Others were focused on supplier-customer negotiations.

I put that knowledge to work, and in my career have negotiated many hundreds if not thousands of contracts and deals. Some deals were quite large — involving many millions of dollars.

But I’ve been involved in the small business world for the past decade now. And I’ve noticed that negotiations encountered by small business owners and managers are a bit different from the ones in large corporations. 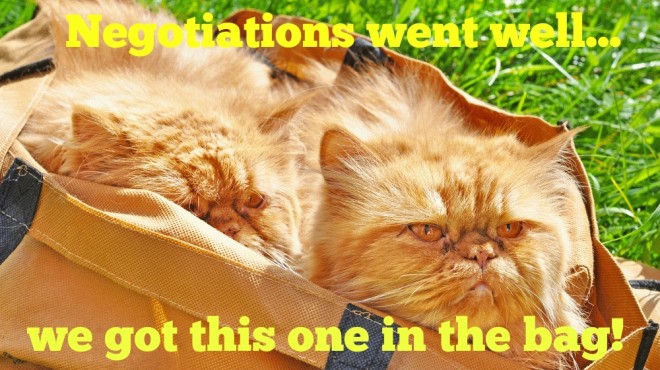 I’ve come up with what I consider a realistic checklist for negotiating a business deal. Here is a 9-point negotiating checklist I’ve honed specifically for small business situations.

We’ve all encountered them at one time or another — the tire kickers. These are people comparing prices or “seeing what’s out there.” They will pump you for information but have no intention of buying from you.

Don’t waste your time trying to negotiate with anyone not serious.

To separate tire kickers from serious parties, ask how soon they plan to purchase, what specific needs they have, and other probing questions. Try to get them to do something that takes a bit of effort, such as setting up a face-to-face meeting, or filling out a short questionnaire, or confirming your notes from an initial phone discussion. Tire kickers usually melt away if called on to get specific or commit to anything.

What are the one or two things that would cause you to walk away if you don’t get them in a business deal? You’d be surprised (or perhaps not) at how many people don’t think through what is essential to them in a deal. They go into a negotiation with only a vague idea of what they want.

Be firm. But be realistic — you can’t have everything.

Communicate your must-haves internally. If someone else on your team or an attorney is involved on your side in the negotiations, they need to be on the same page.

Be prepared, willing and able to walk away if you don’t get your must haves. If you can’t afford to walk away, then it wasn’t really a must have. Know that too.

Gather as much background information as you can before entering an important negotiation. Be aware of prevailing market conditions. Know what current price levels are in your industry. Are there any natural resource shortages or high regulatory compliance costs that may have driven up prices?

What’s the other party’s reputation? Are there any particular issues raised in online reviews that you should negotiate to protect against?

Don’t forget the person you’ll be negotiating with, if you know who it is in advance. Check the person’s profile on LinkedIn for his or her background and interests. Use that information to develop rapport.

A common misconception about negotiating is that it requires beating down the other side.

In most small business situations, that is plain wrong. Your reputation and ability to work with a customer, vendor or other party usually depends on having a decent working relationship after the negotiation concludes.

The negotiating session is the start of a business relationship. It shouldn’t be the premature demise of that relationship because you can’t stand each other after acrimonious negotiations.

A successful negotiation depends on developing rapport. You’ve heard the often-repeated sentence, “People do business with people they know and like.” It’s more true than not.

Naturally, you want to drive a good bargain. But do so by finding common ground and points of agreement.

This is where social skills play a crucial role:

Does the person you’re talking with have sufficient authority to negotiate and make a decision? Will approval be required by someone higher up?

It’s important to know the role of the person you’re dealing with. Be diplomatic. Gently probe about the negotiation and procurement / decision process of the other side. But at the same time, don’t offend the person by implying, “You’d better have authority to decide, or I won’t talk with you.” You may make an instant enemy of someone who could influence a decision for or against you — even if he or she doesn’t have the final say.

Many companies, especially large corporations, involve multiple people in vendor selections or big deals such as acquiring a company. A Senior Vice President may need to sign off on the contract. But the Senior VP won’t be doing the legwork.

The person you’re talking with probably wouldn’t have met with you unless he or she was involved in the decision process in a meaningful capacity. Respect that.

View him or her as a potential champion, not a waste of time.

If it seems like a decision will require approval of someone higher up, find out who that is. Point out that you’ll do everything in your power to give the person on the other side of the table the materials needed to get that approval.

This way, you’re recognizing the person you’re talking with has an important role to play. Yet, you know that he or she will have to justify the proposed deal and get approval or buy in from others. Under these circumstances, it would be counterproductive to press for a decision on the spot.

6. Pin Down Each Side’s Needs

The goal is to understand exactly what each side must have in order to get to an agreement.

State your opening position. This is not an ultimatum. Instead, think of this as your opening salvo of what you’d like as part of the deal. It also signals what you have to offer.

Speak in general terms. “We are proud of our huge range of products — one of the largest in our industry — and we provide personalized service 24/7. We’d love the opportunity to become your supplier. In fact, we’d love it if we could become your long-term supplier and are prepared to offer attractive terms in exchange for a multi-year commitment.”

At this point you haven’t mentioned price or how long a commitment. You haven’t suggested you will only accept a long-term agreement, either. You’ve merely given a general statement in positive terms about what you’d like. You’ve also made clear that this will be a negotiation — a concession from you requires a concession from them.

Get the other side to state their opening position — what they want. Is it locked-in pricing? Is it high-touch service? Is it financing?

Don’t automatically assume you know what the other side considers essential to reach a deal. They may be hiding what’s most important to them. You might think that the lowest price is essential. But if you listen carefully the other side may talk more about reliability, or high-touch service or a one-stop solution.

Probe their opening statement to draw out details. Try to get them to prioritize their “wish list” if it’s a long one.

Get the other side talking by asking open-ended questions like these:

You mentioned you saw our website. Was there anything that grabbed your attention you’d like me to expand on or explain?
One of the things our existing customers routinely rate us high on is our wide selection as a supplier. Do you have a wide range of needs to fulfill?
We’re a small business with a limited budget. Do you have a deal size minimum for customers? Do you require contracts of a certain length?
What’s most important to you, if we were to do business?

Watch their body language. Listen. Anything that makes the other side’s eyes light up or their voice get animated is potentially something you can bargain for.

The often-heard rule is that the party that mentions price first, loses.

This depends on the type of transaction. In many small business transactions, pricing is known and this rule is irrelevant.

But if pricing is not transparent in your industry, then buyers should avoid being pinned down when asked what they “want to pay” or what their budget is. Be cagey and vague. Respond, “I’m not sure – what’s a typical range?”

Buyers, try to get the seller to open with a number. Then if it’s high, as buyer you can act suitably shocked saying “that is more than I was prepared to pay.” Or you could ask something such as “I assume that price includes XYZ – what else does it include?” signalling your expectation to negotiate price for other terms.

Sellers, try to get buyers to throw out a number first, because this theory can work in reverse. The buyer may throw out a number that is higher than you would have opened with. Wouldn’t that be great? If it’s low, you could always say something like, “to get to that low a price, we’d have to bring you down to our entry-level product line, and not the line you asked about.” You’re signalling that price is negotiated for other concessions.

Practice a few responses — whatever is relevant to your industry or to the type of transaction. That way, you won’t be caught off guard when asked to name price or budget and blurt out a number you later regret.

If you must state a number, give yourself wiggle room. Don’t state a price or budget that is the exact number you must have.

Don’t offer up everything immediately. While negotiation involves give and take, you don’t want to give up too before the other side has a chance to respond. You’ll have nothing left to negotiate with later on.

That’s why you don’t want to offer concessions immediately. If you grant a concession without receiving something in exchange, you are in effect negotiating against yourself.

Pose concessions in terms of questions. For example, you might ask, “If we were to give you X, would you be willing to commit to a three-year contract?” This makes it clear that you expect something in return for the concession.

Put the deal in writing as soon as you have a verbal consensus. Within 24 hours is best. Deals die due to lack of momentum. And the longer it takes to put a deal in writing, the more likely the other side may try to renegotiate a point you thought was closed — and gave concessions for!

Take a page from the union negotiator’s handbook. Union negotiators know the importance of documenting complex negotiations. As each point is agreed upon, that point is written up, signed off on, and placed in a notebook — often right there at the negotiating table before the parties leave for the day. At the end of what could be months of negotiation, the negotiators have a notebook containing all of the contract points that have been agreed upon to date.

You don’t have to go to those lengths. The point to remember is to put your deal in writing — right away. If it is going to take a while to get approvals or draw up a contract, at least send an email outlining the main points within 24 hours. Then drive it to a signed contract as soon as possible after that.

And there you have it. These nine points are critical for small business negotiations. Consider each of them when negotiating a business deal.

Download a convenient one-page negotiating checklist that you can save to your computer and print out: