Approvals for Small Business Loans Plummet, According to Biz2Credit Report 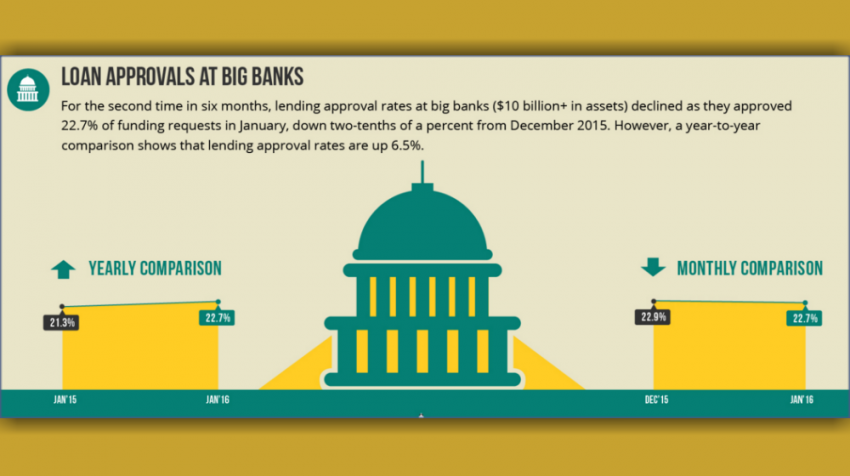 According to the latest Biz2Credit Small Business Lending Index, the monthly analysis of more than 1,000 small business loan applications on Biz2Credit.com, loan approval rates at both big and small banks declined in January.

Reflecting on the findings, Biz2Credit CEO Rohit Arora says, “The turbulence in the stock market and plummeting oil prices in the last month have resulted in a level of uncertainty for lenders.”

He also adds, “While the demand for small business loans held up, the approval standards tightened.”

The big bank approval rate in January was 22.7 percent, a 20 basis point decline from December. It is, however, still a 6.5 percent increase from January 2015.

“Outside economic factors attributed to the drop in loan approvals at big banks last month,” Arora commented. “When there is uncertainty in the market, mainstream lending institutions are less inclined to take risks on loans.”

According to Arora, “Institutional lenders are doing a great job at minimizing the risks of borrowing requests through advanced algorithms.” As the uncertainty in global emerging markets continues to grow, Arora expects institutional lenders to remain a “popular commodity for both investors and borrowers.”

Loan approval rates at alternative lenders remained improved in January, the approval percentages, however, have declined steadily since January 2014.

The dip in small loan approvals at bank and credit unions comes after a long period of steady ascent. Since 2014, small business loan approval rates have risen steadily every month even though, as Arora points out, these lenders are now approving fewer loans.

The fact that the best banks for small business loans are struggling to adapt to technology is also impacting the loan approval rates.

In the coming days, a lot will depend on the stock markets and oil prices to determine whether this drop is just a blip or the beginning of a trend.