Will a New Algorithmic Timeline Change the Look of Twitter? 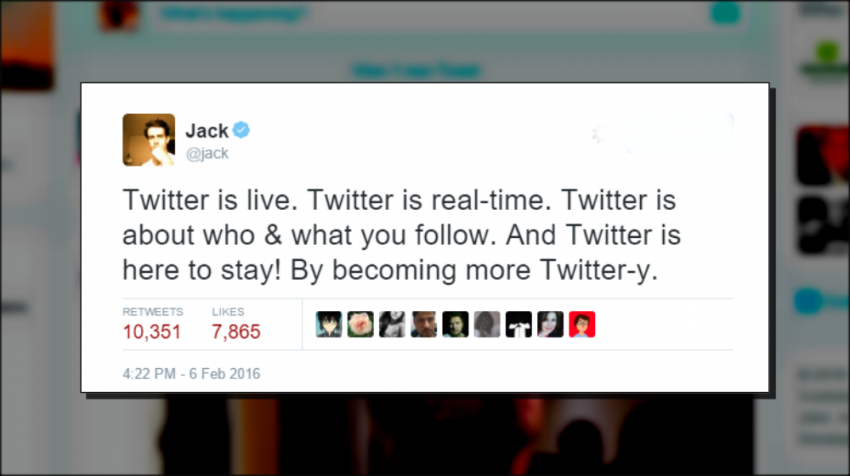 Twitter’s CEO Jack Dorsey moved quickly Saturday to quell fears that a supposed impending change to Twitter’s algorithm timeline will result in a change to the way tweets are displayed on the platform. Disputing a media report detailing the planned changes, Dorsey said that the stream of tweets on the social media site will stay live and in real time.

News and entertainment site BuzzFeed reported on Friday last week that Twitter was on the verge of introducing an algorithmic timeline as early as this week. The new Twitter algorithm timeline would reportedly reorder tweets, showing tweets that the site’s algorithm thinks people want to see as opposed to the current reverse chronological order that shows the latest tweets first.

The report caused a major uproar that made #RIPTwitter become a top trending topic on the popular microblogging platform.

Some disgruntled users even threatened to abandon the service if the change was implemented, with some expressing how upset they are by posting GIFs of Steve Carell’s character in “The Office” saying “NOOOOO” and another of a businessman jumping out a window in an episode of the popular cartoon series “The Simpsons.”

all we wanted was an edit tweet button. #RIPTwitter

Twitter is reportedly changing timelines from chronological order to an algorithm of most popular. #RipTwitter pic.twitter.com/qwjwEsCSpk

Twitter has been under immense pressure from Wall Street to boost its user base and become a more mainstream social media application. Besides struggling to attain advertising revenues equaling those of its larger Facebook rival, the company’s growth has slowed and its stock has slumped. But every time there’s even a hint of an update that might change how people connect with the site, users throw a tantrum. The most recent was in November when the company came under fire for removing Twitter Share Counts.

Twitter isn’t the only social networking site that has faced a backlash from its users. Facebook, for example, was hit with widespread criticism when it introduced news feed, but the company decided to stick with the change. It’s now one of the reasons why the site is so addictive.