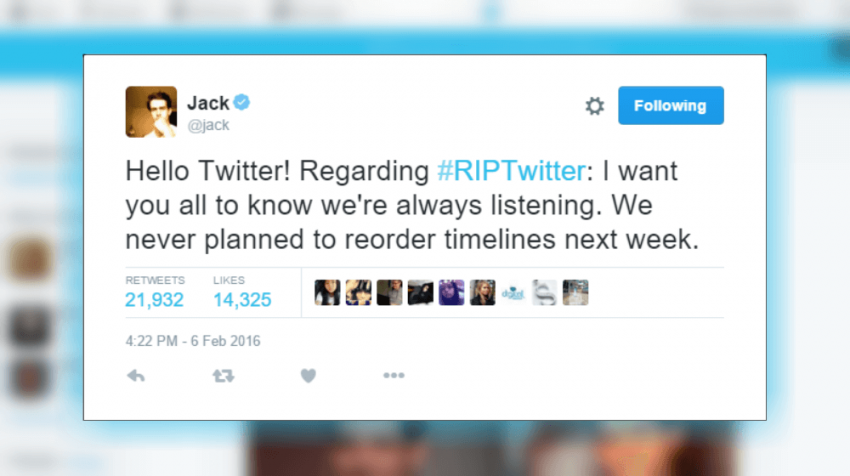 In addition, Periscope has been gaining a lot of attention recently. But users may need to heed some legal warnings about the platform.

These headlines and more are included in this week’s Small Business Trends news and information roundup.

Will a New Algorithmic Timeline Change the Look of Twitter?

Twitter’s CEO Jack Dorsey moved quickly Saturday to quell fears that a supposed impending change to Twitter’s algorithm timeline will result in a change to the way tweets are displayed on the platform. Disputing a media report detailing the planned changes, Dorsey said that the stream of tweets on the social media site will stay live and in real time. “Twitter is live,” he tweeted.

Periscope is the hot topic among businesses and marketers these days and for good reason. Since Twitter acquired Periscope in March of 2015 for $120 million (before it actually launched), it was obvious that live video streaming wasn’t just a fad. It was here to stay. Fast forward just 10 months and it’s even more obvious that live streaming is a force to be reckoned with.

Monique Johnson: Livestreaming is More Than Hitting a Button on Your Smartphone

In January 2016, Periscope co-founder and CEO Kayvon Beykpour announced more than 100 million broadcasts have been created since Periscope’s launch in March of 2015. Not only are lots of people using Periscope on their phones to easily broadcast videos, but even more people are watching them.

Constant Contact, a company known for providing email marketing services for small businesses, has just been acquired by one of the largest providers of hosting and other online business services. The acquisition was valued at $1.1 billion. Endurance International is announcing the completion of the acquisition of Constant Contact first announced in November 2015.

Small Business Jobs Up in January, According to ADP Report

Small businesses are hopeful about growth in 2016, and their optimism is driving them to hire more people. According to a monthly Small Business Report by human resources management solutions provider ADP, in collaboration with Moody’s Analytics, small businesses with 1-49 employees created 79,000 jobs in January.

During the 1990s, before kids were playing Need for Speed and Call of Duty on their Playstations, there was the Super Soaker water gun. Super Soaker was a particularly epic invention for children everywhere that rendered traditional pistol water guns that piddled out a thin stream of water obsolete, has just earned it a place in the Toy Hall of Fame.

Content marketing isn’t producing the results it once did. Brands are producing more content on more channels but are seeing fewer results for their efforts, says a new report from competitive analytics company TrackMaven. Entitled “The Content Marketing Paradox Revisited,” the report examines at content marketing across multiple industries.

Have You Noticed How Google Beefed Up Its Webmaster Guidelines?

The changes to Google’s Webmaster Guidelines are not an everyday occurrence, so even the smallest tweak makes news. However, this time around there are several updates businesses, site developers, SEO practitioners and others should take a look at.

The hazards of smoking cigarettes are well documented. But some people continue to do it because they don’t feel like there are any great alternatives out there. That’s the attitude that Smart Spark Vape + Lounge is trying to eliminate. Read more about the business’s offerings and its mission in this week’s Small Business Spotlight.

The amount of freelance and independent workers has increased drastically in recent years. And with that growing trend of non-traditional workers, co-working spaces have also experienced drastic growth. If you haven’t checked out any co-working spaces recently, then you might think they’re just open spaces with desks and WiFi.

America has always been considered the land of opportunity. With the advent of the Internet and eBay, the whole world is getting in on the act. For Cori and Beau O’Steen, eBay was the stairway to the world of commerce with their business, UpakNShip, a shipping materials supply store.

5 Business Ideas You Can Start to Combat Hostile Drones

There are certainly business applications for drones. But there is a darker side to the unmanned flying devices as well. Commercially available drones have the potential to be used to invade people’s privacy in a hostile or menacing way. Just the thought of drones in the wrong hands is terrifying.