Can Wearable Technology Threaten the Cyber Security of Your Business? 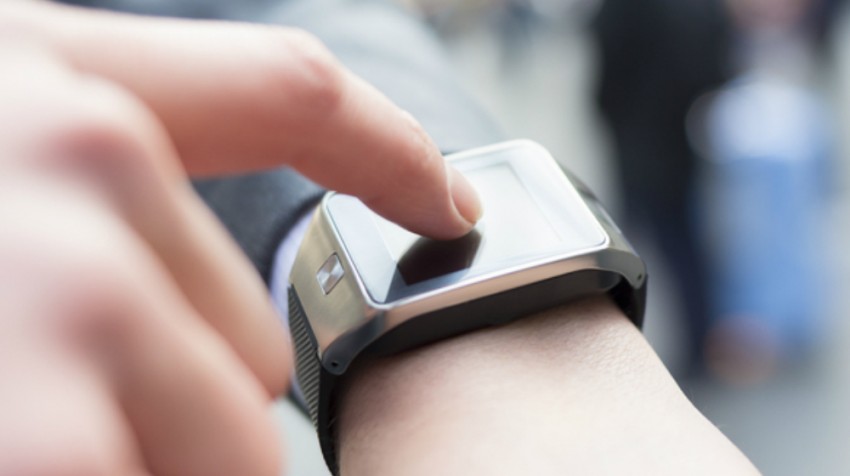 These days, the most vulnerable spot in your company’s cyber security walks in and out of your front door multiple times a day.

That’s right – long gone are the days when your data lived safely behind firewalls. Sensitive information now lives within mobile clothing and accessories such as wristband fitness trackers, transaction-enabled devices and even bras.

Welcome to the brave new world of wearables, the focus of the Travelers Indemnity Company’s, or simply Travelers, latest entry in its Global Technology’s Risk Advisor series, “The Wearables Revolution Has Arrived” (PDF).

Breaking Down The Types of Wearables

In their report, Travelers broke down wearables into five categories:

According to Travelers, “Regardless of their physical size or commercial application, wearable devices have three enabling technologies that make them ‘smart’:” 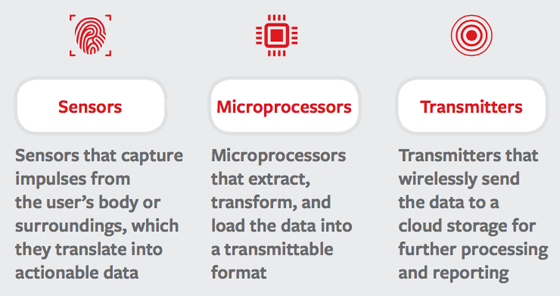 Many wearable products are able to track more than the simple information for which they’re marketed. Two examples of this include:

Travelers breaks down the risks posed by wearables into three “classes”:

Each risk class poses its own problems to businesses, though the second, “Bodily harm” is specific only to wearable manufacturers and will not be discussed here. The following sections will look at the business risks of the remaining two classes and list approaches to minimize those risks.

If you’re worried about wearable technology security issues, you’re not alone. In fact, cyber risks and data breaches were the second-biggest concern of US businesses in 2015: 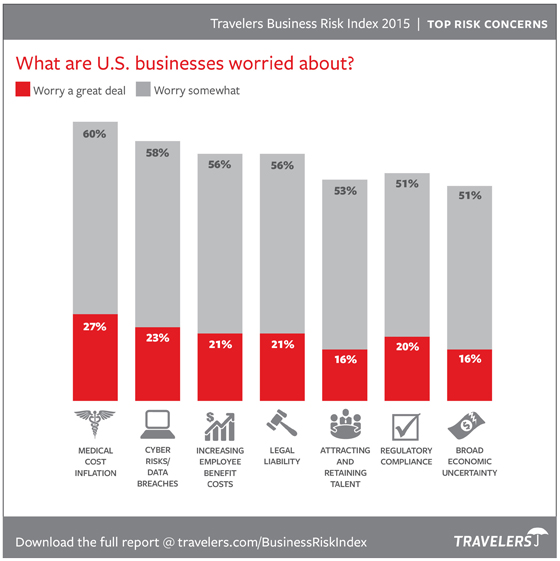 The following two “Illustrative Risk Scenarios” provided by Travelers demonstrate that wearable technology security issues bring their own brand of risks to businesses:

Note: there were personal risk scenarios mentioned in the report as well – we will focus on the business-specific examples only here.

To minimize wearable technology security issues, Travelers suggest that businesses look for the following features in the wearables they allow and, if they cannot find them, they should demand them from manufacturers:

While it’s presumed that wearable manufacturers take every possible precaution to release a flawless product to the marketplace, it’s inevitable that errors will happen and that details will be missed.

The following two “Illustrative Risk Scenarios” provided by Travelers demonstrate that wearables bring their own brand of “Murphy’s Law” to businesses:

While Traveler’s suggestions to alleviate risk in this class were primarily aimed at limiting the liability of wearable manufacturers, here are a couple of common-sense recommendations you can use to reduce the risk to your business in these scenarios:

The growing number of wearable “smart” products is sure to usher in a new age of wearable technology security issues for businesses. While this may lead you to ban wearables altogether, their business benefits in terms of increased productivity and functionality are undeniable.

As with all new technologies, the key lies in managing risk; reducing the damage that a new technology can inflict on your business. With that approach in mind, your business can more comfortably move forward into exploring the wearables revolution.

Matt Mansfield is the Tech Editor and SEO Specialist at Small Business Trends where he is responsible for directing and writing many of the site’s product reviews, technology how-to’s, and lists of small business resources as well as increasing the reach of our content.