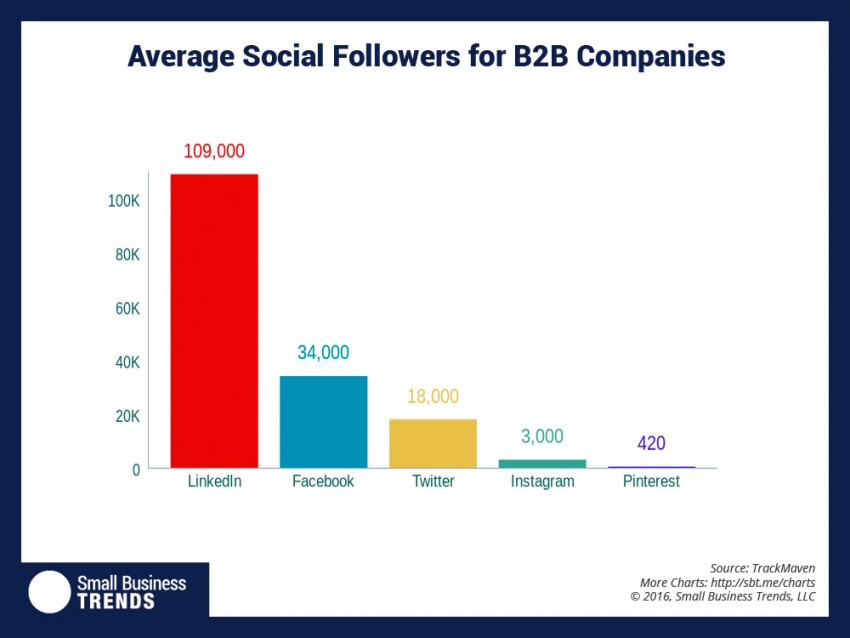 If you run a B2B company (i.e., a business that sells to other businesses), have you ever wanted to benchmark your company’s social media efforts? See how you’re doing compared to others?

TrackMaven recently conducted a study of B2B brands and their social media activity. The study found that LinkedIn just kills it when it comes to the average number of social media followers among B2B businesses.

B2B companies had an impressive 109,000 LinkedIn followers on average.

LinkedIn’s huge lead cuts across nearly all industries according to the study. One notable exception is the computer hardware industry, where it seems Facebook is the social media platform most popular with followers.

To some observers, LinkedIn’s near-universal B2B dominance may not be all that surprising. After all, LinkedIn is a social networking platform for business professionals. It stands to reason that if you’re selling products or services to other businesses, you go where the buyers are.

What may be surprising is that LinkedIn outpaces other social networks by such a huge margin.

Another surprising factor may be that Facebook, with its consumer focus, came in second. But Facebook’s second place finish may be more a factor of its size rather than its audience makeup. With Facebook having over a billion monthly active users, lots of business buyers are bound to be among those billion-plus users.

Still, there are a few takeaways for small businesses:

What do you make of this data? Which is your best performing platform in terms of number of followers?