Average Time to Prepare Taxes? 80 Hours for Some Small Biz 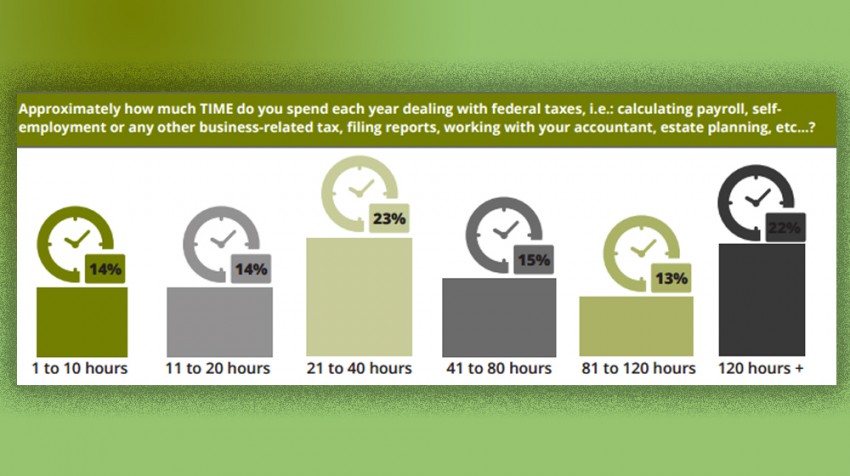 Preparing taxes is a taxing affair for small businesses, according to the 2015 Small Business Taxation Survey (PDF) by the National Small Business Association (NSBA).

The study found for one in three small business owners, the average time to prepare taxes was more than 80 hours per year. Moreover, these businesses were spending nearly $5,000 or more annually on federal taxes. An overwhelming majority (85 percent) of small businesses pay an external tax practitioner or accountant to handle their taxes.

It goes without saying, preparing taxes costs both time and money for cash-strapped small business owners.

The study highlights taxation woes faced by small businesses, something small firm owners have been talking about for years now.

The majority of small businesses (59 percent, up from 53 percent in 2014) cited administrative burdens as the biggest challenge posed by federal taxes. About 42 percent of businesses said bearing the financial burden involved in the federal taxation processes is the biggest issue for them.

Beyond time and money, the complex federal tax code has a significant impact on the day-to-day operation and business decisions of small firms. To give an example, more than two-thirds of small businesses utilize some kind of tax benefit covered under the tax extenders umbrella.

“It is no surprise, given Congress’ inability to effectively address tax legislation last year, that there was an increase in the administrative burden associated with federal taxes,” Todd McCracken, NSBA President and CEO said in a press release. “The tax code is irretrievably broken and now is the time for lawmakers to act.”

The 2015 Small Business Taxation Survey is not the only study that has revealed the taxation challenges faced by small businesses today. Another survey conducted by software solutions provider Wasp Barcode Technologies also found doing taxes was a huge challenge for small businesses.

In that survey, 52 percent of respondents said they feel they pay too much in taxes.

A major cause of concern for the small business owners is that tax compliance costs have been rising steadily. For example, the total cost to U.S. small businesses of complying with complex tax issues was around $150 billion in 2009; it rose to $200 billion in 2011.

Most importantly, doing taxes is not getting any easier. If anything, it’s becoming increasingly difficult for the small business owners to prepare taxes without spending a lot of time and money.

The 2015 Small Business Taxation Survey was conducted online from March 13-24, 2015. More than 675 small business owners participated in the survey.