Are You Living in a Small Business Fantasy World? 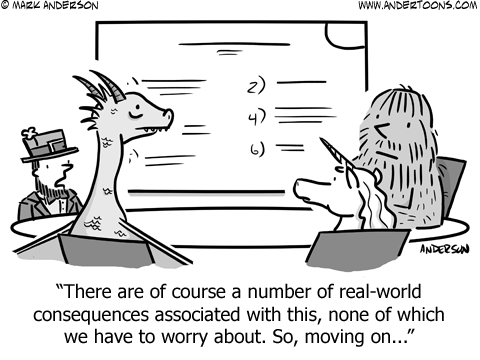 I was listening to the news one day while driving and the phrase “real-world consequences” went by. It’s one of those kinds of words or phrases that sets off the cartoonist alarm in my head. I immediately started turning the words over and over.

What about real-world aftermaths? Would real-world causation be newsworthy? But it’s when I started mulling over non-real-world consequences that the idea of populating a conference room with imaginary beings happened.

I knew right away that Bigfoot and a unicorn would be there, but who/what else reads quickly? The Abominable Snowman is too similar to Bigfoot. The Loch Ness Monster would be great, but she’s really big. And would she be identifiable?

Finally, I settled on adding a leprechaun and a dragon, but I’m still not happy with how they’re seated. (The dragon takes too much attention from the leprechaun, I think.)

I’ve mentioned before that cartooning is a weird job and it’s examples like this that illustrate that so well.
2 Comments ▼
Editor's Picks
Mark Anderson