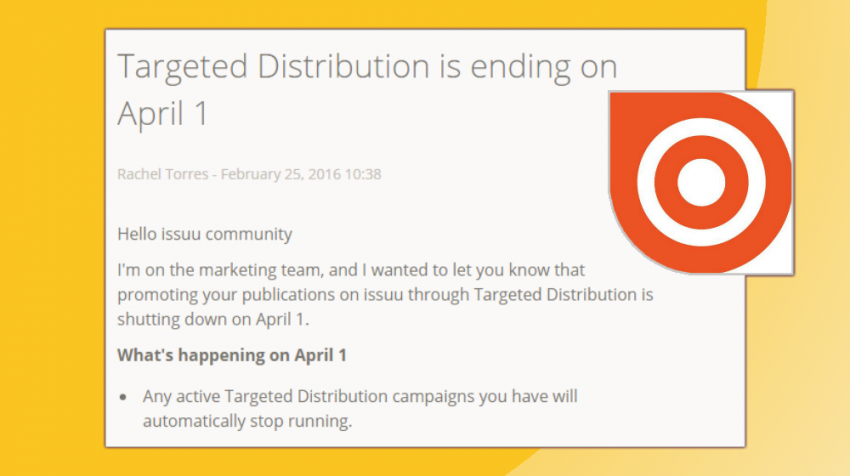 Digital magazine platform, Issuu, is shutting down its Targeted Distribution (TD) campaigns service, effective April 1, 2016. This, however, is no April Fool’s Day prank!

Headquartered in Menlo Park, California, Issuu is a platform that allows anyone with digital content to upload and distribute their publications in just a few minutes.

Launched in 2011, Issuu’s TD service allowed for publishers to target a specific audience for their publication. Customers start a campaign, create an ad and set up a budget. You choose the type of reader you want to see your ad and Issuu will put it out. You only pay when someone clicks on the ad.

Evidently, this marketing plan has been less than successful since Issuu plans to deep six it on April 1. Issuu has not answered requests for an interview.

On that day, all vouchers for this service will be voided. Issuu says on its website:

On April 1, Issuu says the following will happen:

Founded in 2006, in Copenhagen, Denmark, the goal was democratizing print media. Founders Michael Hansen, Ruben Bjerg Hansen, Mikkel Jensen and Martin Ferro-Thomsen, wanted to give both aspiring and established publishers the chance to create their own digital magazines. In 2009, Issuu was named one of Time’s 50 Best Websites and was a Webby Award honoree.

JoAnn McFarland is a Staff Writer for Small Business Trends. She covers breaking news such as new product announcements, government policy, acquisitions and other industry developments. She is a published author and comes from a family-business background.
6 Reactions
Subscribe
Follow @smallbiztrends
RSS LinkedIn Pinterest iTunes